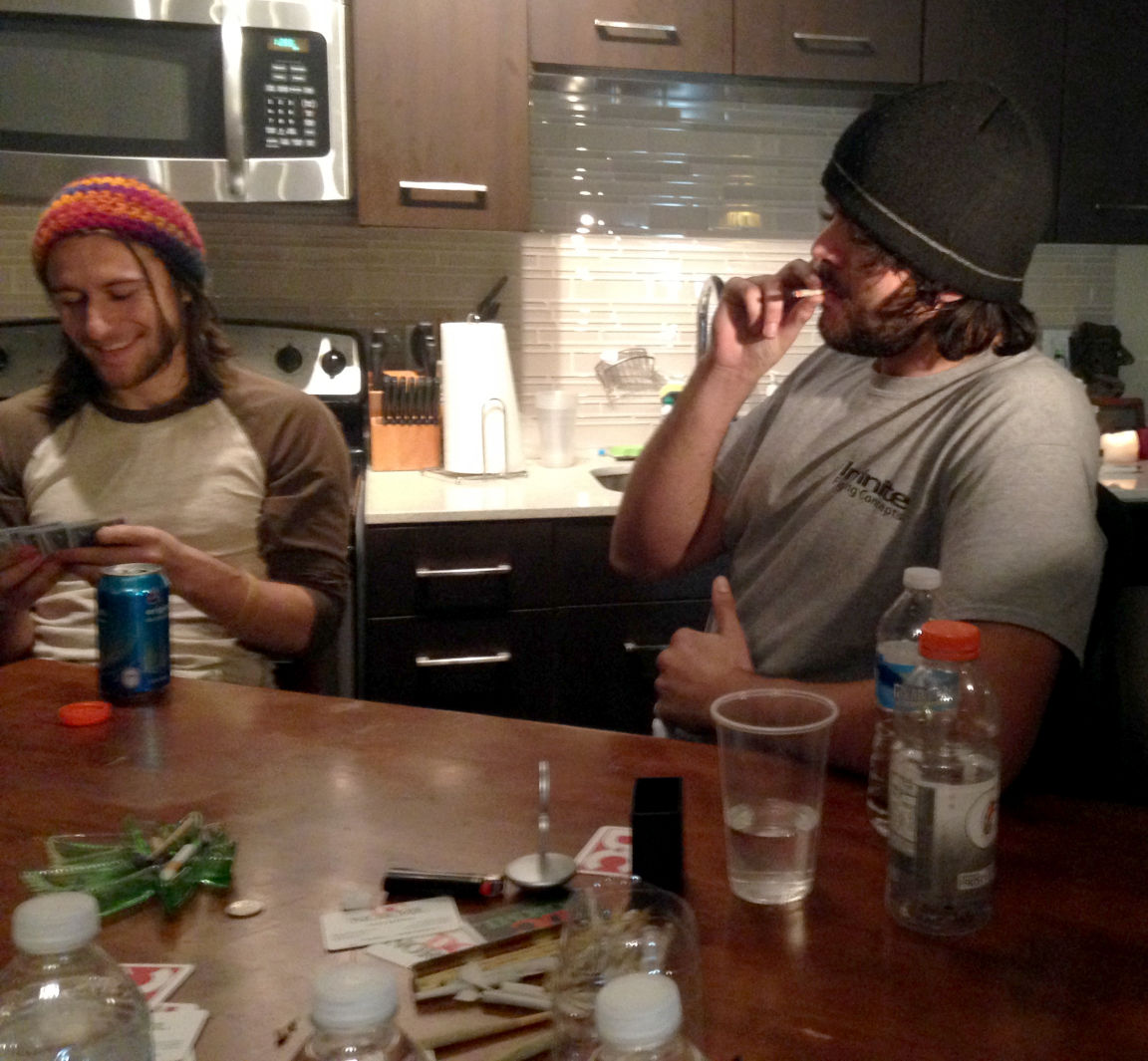 In search of activists and friends of DC NORML (the National Organization for the Reform of Marijuana Laws), the author found a private home where the legalization of marijuana was celebrated. Justin Robb, 24, right, smokes a marijuana joint a little after 12:01 a.m. Feb. 26 when pot became legal, with some restrictions, in the District of Columbia. 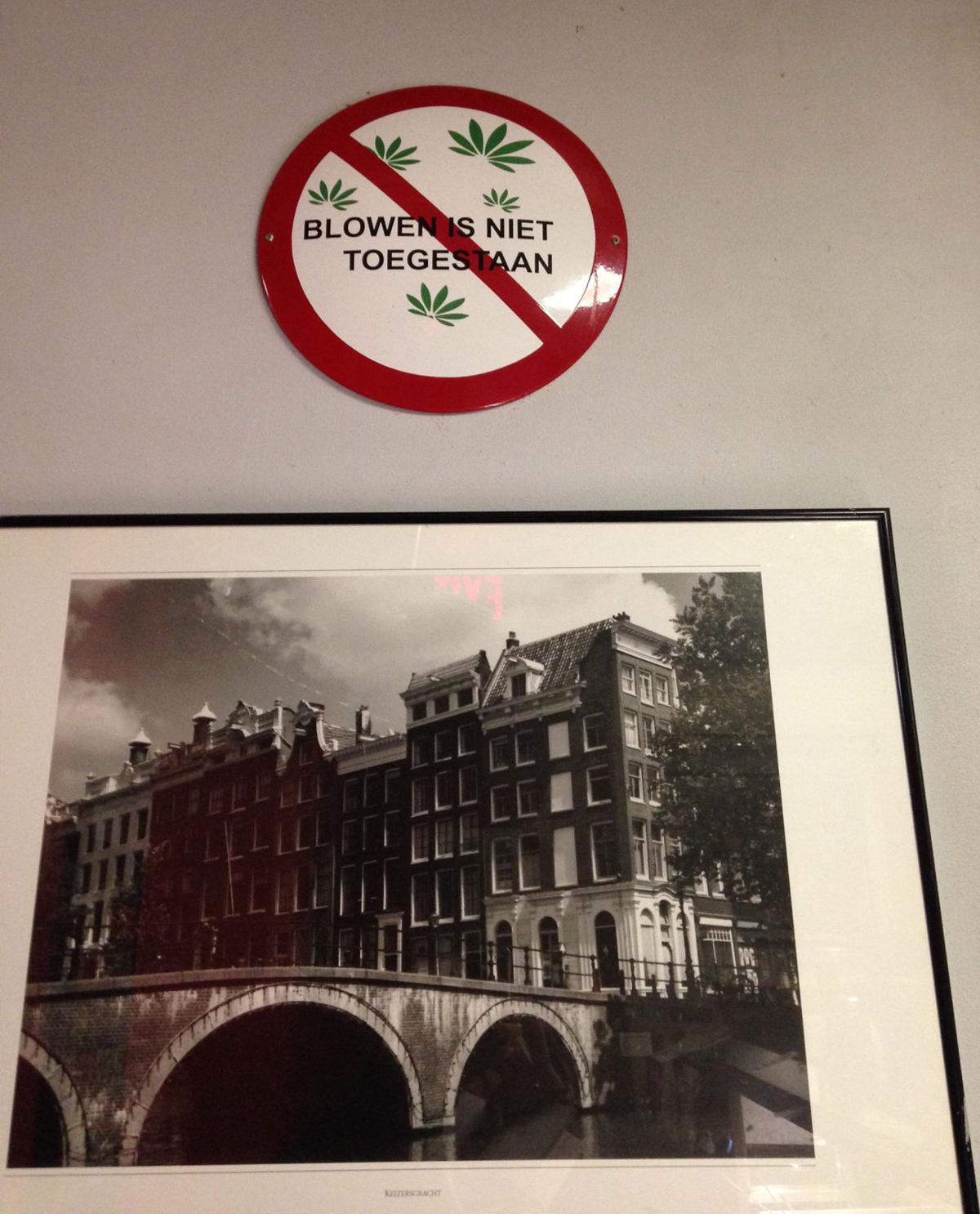 The District of Columbia is not Amsterdam. This sign on a wall at Amsterdam Falafel in the trendy Adams Morgan neighborhood says “Blowen is niet toegestaan.” The Google translation: “Smoking cannabis is not allowed.”

In search of activists and friends of DC NORML (the National Organization for the Reform of Marijuana Laws), the author found a private home where the legalization of marijuana was celebrated. Justin Robb, 24, right, smokes a marijuana joint a little after 12:01 a.m. Feb. 26 when pot became legal, with some restrictions, in the District of Columbia.

The District of Columbia is not Amsterdam. This sign on a wall at Amsterdam Falafel in the trendy Adams Morgan neighborhood says “Blowen is niet toegestaan.” The Google translation: “Smoking cannabis is not allowed.”

WASHINGTON — If marijuana is going to be as mainstream as chardonnay in our country's capital, it shouldn't be tough for a minivan-driving mother of two to find a pot party, right? Especially not if the city's stoners are lighting up in the wee hours Thursday to celebrate legalization.

"So where's the pot party in D.C. tonight?" I asked, a few hours before the new law took effect.

I tried Facebook. "Well, I would but since the law allows me to smoke it, but not to actually purchase it, it's a challenge," responded one of my Mommyland friends.

Yeah, sounds like someone was high when writing the new law, which was slam-dunked by 70 percent of the voters.

You can possess up to two ounces, but you can't buy any. You can share, but you can't sell. You can grow up to six plants, but only three can be mature. You can't consume it in any public place but absolutely not on federal land. So no hazy midnight epiphanies at the Lincoln Memorial, OK?

Navigating the map showing which 29 percent of D.C.'s land is federal looks like way, way too much trouble for any stoner to attempt.

It's a trap! Wait, I'm not supposed to be paranoid yet.

Maybe if I just drove around, like I was looking for a high school kegger, I'd find a pot party.

"Sir, do you know of any pot parties?" I asked, rolling down the window of the minivan.

"CAPS!!!!" he yelled back, double fist-pumping the air, spittle flying. Definitely not a pot smoker.

Where to go next? D.C. Mayor Muriel Bowser said it wasn't going to be like Amsterdam here in Washington.

Amsterdam! Does anything say marijuana more than Amsterdam Falafel in Adams-Morgan?

Inside the shop, I could see the whole package — bearded guy with pink hair and long-haired guy behind the counter, customer with a man bun ordering falafel. I parked the minivan and rolled in wearing my Eddie Bauer jacket and my bifocals.

"Are you guys smoking tonight?" I asked.

They pointed to a sign on the wall: "Blowen is niet toegestaan."

"Smoking cannabis is not allowed," Google translate tells me.

"Not in here," long-haired falafel maker told me. "You can do it in the privacy of your own home."

"I will likely partake when I get home tonight," pink hair told me. But no invitation to join him was forthcoming.

Maybe Bowser, who stared down last-minute threats from Congress, will be at a pot party? This was her first big move facing off with the federal government, a spotlight moment. Would she be up at 12:01 a.m. toking?

"No, absolutely not," she said at a news conference.

I'm starting to wonder if D.C. is just too nerdy for this law. Colorado? Sure. Alaska? Totally. But D.C.? I think we might not be able to handle it.

So how about the folks who have been the activists in all this?

I got in touch with Morgan Fox, the communications director at the Marijuana Policy Project, hoping he'd invite me to a pot party.

"There may be some folks having get-togethers at bars or at homes, but none that I know about," he said. "I probably won't even stay up that late. Long day tomorrow!"

I knew the folks from DC NORML (the National Organization for the Reform of Marijuana Laws) were having a party at Madame's Organ down the street, so maybe they'd be my ticket.

And there was Bill Duggan, owner of the place and self-described "vortex for chaos," at the door.

Because of the law, Duggan couldn't legally host a pot party at his bar. So he wondered if he could close it down and declare it a private affair to make it legal.

"I'd have to make calls," he said, and explained why he decided it was easier to just say no.

It was insane, though, to see the very thing he spent 25 days in a West Virginia jail for in 1970 become legal. "It was half an ounce of pot they found in the bottom of my sleeping bag," he said. "I was facing 20 years of hard labor."

I asked him if he was going to get high as soon as he got home.

"Nah. I only do it like twice a year," the Party King said. "Not tonight." But he knew where the NORML crowd had gone.

"Here's the address. The guys went to an apartment," he told me. Back in the minivan.

It was cute that one of the guys came out into the hallway of the fancy-schmancy condo building with a loungey fireplace in the lobby to meet me.

Because I could've followed the smell and found the apartment, no prob.

The door opened and a Mystery Machine cloud of smoke hit my face. Reggae music was playing, lots of beanies and beards, batik pinned to the ceiling.

A pile of joints was on the table, and there was no chance I wasn't walking out of that room high as a kite, whether I took a hit or not.

"It's very symbolic," Justin Robb, 24, said, after taking a long draw on one of the "donated" joints and getting ready to drop some serious philosophy on us all. "Uh, I don't know why it's symbolic."

He laughs. "No, it's symbolic because this is the nation's capital. And if it can happen here, it can happen anywhere," he concluded.

Robb, who lives in Maryland, isn't new to pot. But he said smoking it in an apartment a few blocks from the Capitol dome, with TV cameras and reporters in the room, felt different.

"It felt relaxing," he said. "Not nerve-wracking."

He'd obviously had no trouble obtaining his stash. But what about me? I don't have my own dealer. I've got the kids, the mortgage, the minivan, early morning soccer. If marijuana is supposed to be legal and kosher, why is it all sketchy when it comes to finding pot? Unless you're already part of the pot subculture, it's not easy to get it legally.

Alex Jeffrey, the executive director of DC NORML, said the scene at his condo will be the new normal. His organization will help you get some. Oh, and he's going to be at the DC Pot Expo this weekend, and that's when the business part — the ka-ching — in all this begins.

"You want to take one home?" he asked, handing me a complimentary joint.

I decline, because I'm all set with the smell in my hair and my coat. It is impossible to steep in that smoke for too long without craving Doritos.

So I said goodbye to the beanie boys and headed to 7-Eleven.

The guys there said business wasn't up. And they did not purposefully rearrange their display to feature the Cheetos Munchies product line near the cash register on this auspicious day in D.C. history.

"Pot? Pots were illegal?" said the nice guy behind the cash register, when I asked him if legalizing pot will change his business.

Outside, a man with a cane held the door open for me and asked for $10 to buy a place to sleep for the night. "My leg's all swollen and I can't hardly stand no more," he said.

I gave him the money, and he asked for a ride to an apartment building a few blocks away. I asked him what he thought of the legalization as we pulled away.

"Whooowee," he exhaled, and put his forehead on his cane.

He was chased down by a police officer after trying to buy a joint almost 30 years ago. "Every job, every interview, I had to answer for that," he said.

He lost jobs and began dealing PCP. That landed him 10 years in prison.

"That's where I got stabbed. Doctors said I wouldn't walk again. Stabbed 19 times," he told me. "And just think, people are partying tonight, doing it legal. Something that got me locked up. Changed my life. Can't they go back and sponge out the records of us who got convicted?"

He got out of the minivan, slowly, with his cane.

"I can get you some right now, in there if you want," he offered, pointing to the apartment building where he's renting a bed for $10. "If it's legal now, you don't have nothing to worry about."

He said he has asthma and doesn't smoke anymore. But a marijuana cookie or brownie. He'll take that. And he'll smile, he said, when he eats it.

He headed inside to get some sleep. I pointed the minivan toward home as an early morning snow began to fall, giving my kids yet another weather-related day off school. I should have kept that joint.