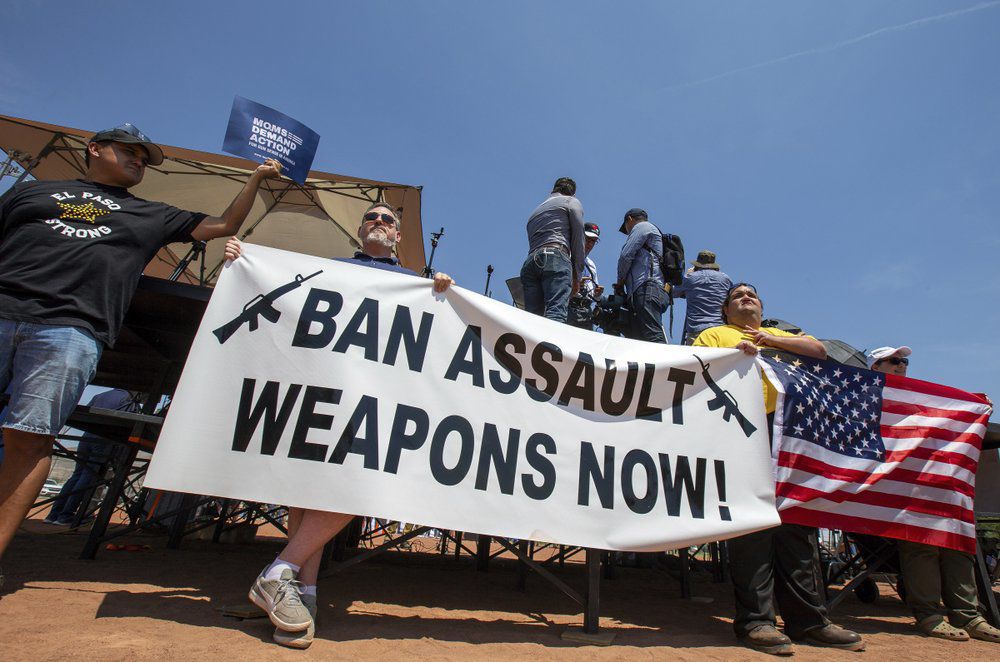 Demonstrators hold a banner to greet President Donald Trump's visit to El Paso, Texas, Wednesday in the aftermath of the mass shooting there. 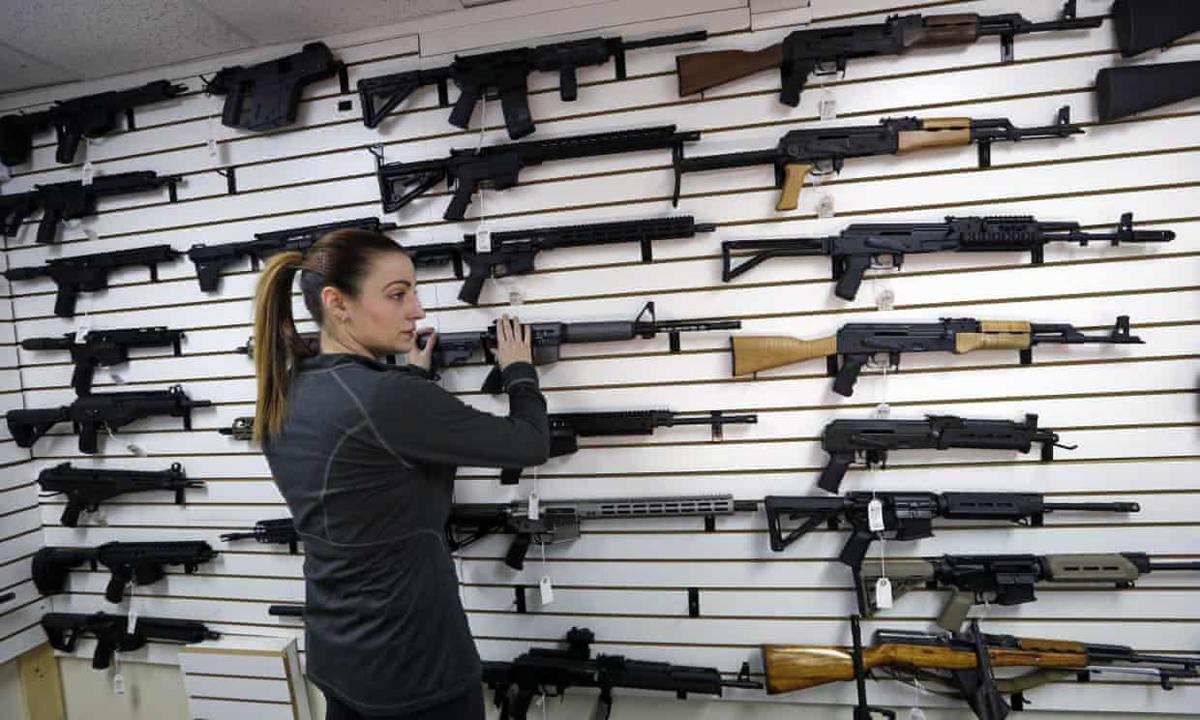 Demonstrators hold a banner to greet President Donald Trump's visit to El Paso, Texas, Wednesday in the aftermath of the mass shooting there.

In 2002, a friend’s eight-year-old daughter, Brianna Caddell, while sleeping in her bed, was fatally shot with an AK-47 assault rifle. The shooter, a drug dealer who had beef with another drug dealer, fired on the wrong house in Detroit, spraying it with two dozen rounds.

One of the bullets ripped through the front porch into Brianna's first-floor bedroom. It went through her arm, before bursting through another wall. Another bullet hit her in the chest.

Brianna's mother, Pamela Martin, wanted to donate her daughter's organs. But Brianna's beautiful eyes were the only part of her body left intact. So Martin donated them and became a community activist.

Like all Detroiters, I was outraged and stunned. A columnist and editorial writer for the Detroit Free Press, I had seen a lot of senseless killings. The death of innocent child, however, after her home was sprayed indiscriminately by a weapon of war, sickened me.

That was 17 years ago. Even the highest-profile killings then were motivated by money, revenge, or another horribly unjustified but explainable reason.

During my nearly 20 years in Detroit, the city reported 300 to 400 homicides a year. A few were as macabre as Brianna's. Some were provoked by little more than an untoward stare, a practice we called “grimmin.”

Still, I never witnessed a gunman entering a crowded store or school with an assault rifle, and calmly and coolly opening up, slaughtering, indiscriminately, people he had never known, people who had never slighted or disrespected him.

Today's killing sprees represent a diabolical and irrational hatred of others and self, or perhaps an equally irrational quest for glory, recognition and immortality.

On the real: Violence is part of our history. It is, as Stokely Carmichael famously said, “as American as cherry pie.” But God help us all if we ever get used to it.

I'm no different than you. I want neat solutions, easy answers. I want to fix problems – now – and blame others for them.

Whatever his flaws and failures, President Trump is not responsible for 22 dead and 24 injured in El Paso. If he were, we could solve this problem simply by electing a new president.

From the other side, here's another knee-jerk response: “It's not the gun; it's the person.”

It takes a person to pull a trigger. But what trigger he pulls matters. A man with a 9 mm handgun might kill two or four. With an assault rifle and several 30-round magazines, he might kill 22, as Patrick Crusius, 21, did in El Paso; or 9, as Connor Betts, 24, did in Dayton

Is an armed community safer?

My gut says no, but I also have a concealed carry license. I own a Sig Sauer 9mm handgun. In the extremely unlikely event I'm in a mall, or on a crowded street, when someone starts blasting, you can best believe I want to be strapped.

If the manufacture of firearms ceased forever today, this country still would have hundreds of millions of guns – enough to give generations easy access to firearms.

An express lane for assault rifles

Three years after Brianna Caddell's murder with an AK-47, I decided to check out how easy these guns were to get, and then write a column for the Detroit Free Press. I asked a former gang leader I knew to go to a gun show with me at the Gibraltar Trade Center, outside Detroit, and show me how to do it.

I started by buying a Yugoslavian SKS military rifle, probably more than 40 years old, with a worn walnut handle. It used cheap and readily available 7.62X39mm ammunition, and came with flip-up sights and a bayonet.

A chatty saleswoman tried to interest me in a in a 50-caliber Beowulf, a “bad mamma jamma,” she said, that could sink a ship. The recoil, she said, would “bust up my shoulder.”

It took me five minutes to buy the SKS, which appeared similar to an AK-47. If memory serves, I filled out a one-page form with my name, address, and birthdate, and put the $200 purchase on a credit card.

At another booth, I bought a hellfire trigger system for $60 that could enable the gun to shoot in more lethal three-round spurts. I also bought a detachable 30-round magazine for $25, and a fold-down stock with a pistol grip for $55 – all with no background check.

A few years ago, I did a similar story, as a deputy editor at The Blade in Toledo. At another gun show I bought an AR-15 semi-automatic rifle, two 30-round magazines, and a box of .223 Remington cartridges for $1,200.

This time, the purchase took about 10 minutes. Because I bought from a licensed dealer, I had to undergo a background check that took a few minutes.

On both occasions, I walked out with my rifle thinking, this is crazy. I donated the first gun to the Wayne County Sheriff’s Office in Detroit, which used it for training. I gave the second gun to the Toledo Police Department.

In the aftermath of El Paso and Dayton, President Trump says he’s considering tougher background checks for gun buyers and plans to talk with congressional leaders about the issue.

Gun violence is a public health issue. Somehow, we need to be immunized. If the president provides an opening to move forward on any front, even one small step, we shame ourselves by not taking it.

Our safety and sanity is a long journey that includes reforming our mental health system, which is in a shameful shambles – and, yes, I believe we need some restrictions on gun ownership and use.

I may be wrong. I understand many people just enjoy shooting assault rifles recreationally and would never use them to hurt anyone. But then I think of Brianna Caddell and the thousands of victims of mass shootings and their right to life seems much more important.

Like you, I'm trying to figure it out, to make sense of what was once unthinkable. Staring at the new face of death, we must love one another or perish.

With every fatal shot, we all bleed.

Jeff Gerritt is the editor of the Palestine, Texas, Herald-Press. Reach him at jgerritt@palestineherald.com.