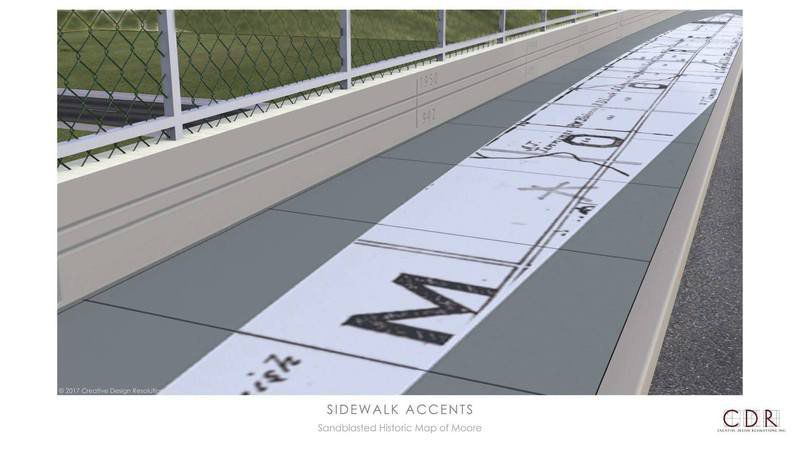 The sidewalks on the 34th Street bridge will contain a timeline of the history of Moore upon completion of the project in 2019. 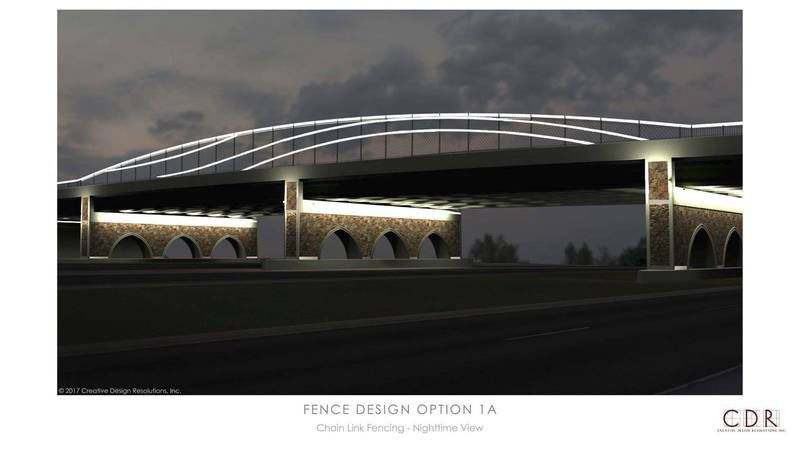 The 34th Street bridge will resemble this concept photo when it is completed sometime in 2019.

The sidewalks on the 34th Street bridge will contain a timeline of the history of Moore upon completion of the project in 2019.

The 34th Street bridge will resemble this concept photo when it is completed sometime in 2019.

The City of Moore approved a design plan for the 34th Street bridge that will pass over Interstate 35.

The plan, unanimously approved by city council on Monday, includes an arched, lit frame, stone facade, and a sidewalk with a historical nod to the city. It is designed to include both traditional and modern elements.

“This is the gateway into Moore,” City Manager Brooks Mitchell said. “We want Moore to have its own unique identity, and we think this bridge design does that. You can look at the bridge and know you’re in Moore. Sure, there’s going to be a sign that says ‘Moore’ on it, but even without that, you’ll know you’re in Moore.”

The bridge was approved by voters in a 2014 bond election. Council approved a deal with Creative Design Resolutions in the spring to design the aesthetics of the bridge with community input.

The city then held a town meeting for public input and created a survey based on that input. A five person committee of two council members and three citizens was put together and narrowed down a list of proposals to present to council.

“That was more of the process where we talked out what citizens wanted,” Danielle McKenzie, council member for Ward 1, said. “We got a lot of input, more than I would have expected. The citizens made it clear they wanted something unique to Moore. They talked a lot about lighting and looks, but also to remain mindful of money.”

Because of its location, council members expressed a desire for citizens to have as much input as possible. On top of serving as the city’s front door, 34th Street will ultimately help traffic flow with a bridge, Mitchell said.

“There continues to be growth to the south, and 34th Street is building up,” he said. “This will create a new way for people to get over I-35 and, in doing so, it will relieve some of the congestion on 19th Street. We like busy streets, but we don’t like congested streets.”

The final plans for the bridge will now be submitted to the Oklahoma Department of Transportation for a 60-day approval period. Once ODOT gives its blessing, the project will be put out to bid in March and should be underway shortly thereafter, Mitchell said.

“We’re closer to a year out,” he said. “We submit the plans to ODOT for final approval. We’ve worked closely with ODOT throughout the process, so I don’t see there being any issues there.”

A little under four years after its approval, the 34th Street bridge project has some light at the end of the tunnel.

“I think we’ve got a unique bridge design that’s going to be a real asset to the city of Moore. We look forward to its completion.”

In addition, the design for this bridge is a window into the future of Moore, McKenzie said. Its design will be used in similar future projects.

“We want to continue with upgrading infrastructure as time and money allows,” McKenzie said. “So it’s a starting point for how we want our city to look down the road. This is a continuation on what we could do on other bridges in the city, and not just overpasses.”