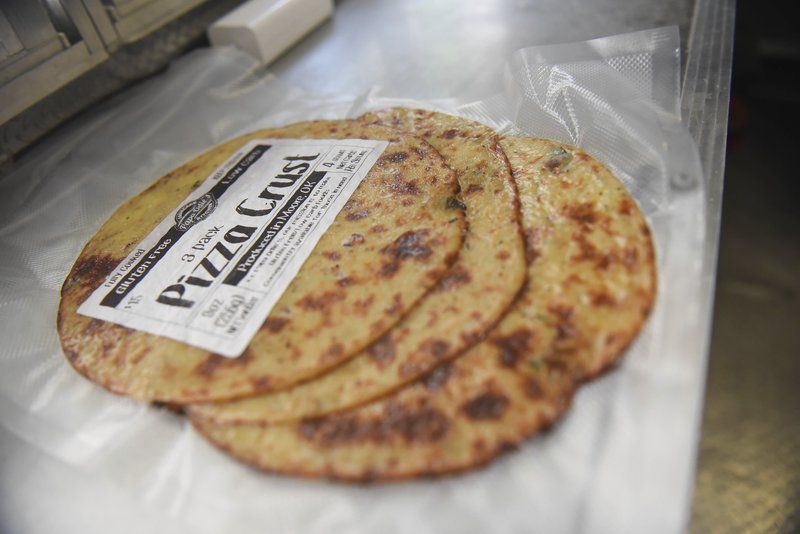 Papa Odie's pizza crusts can be bought frozen from its location at 623 N. Broadway St. Suite C in Moore. 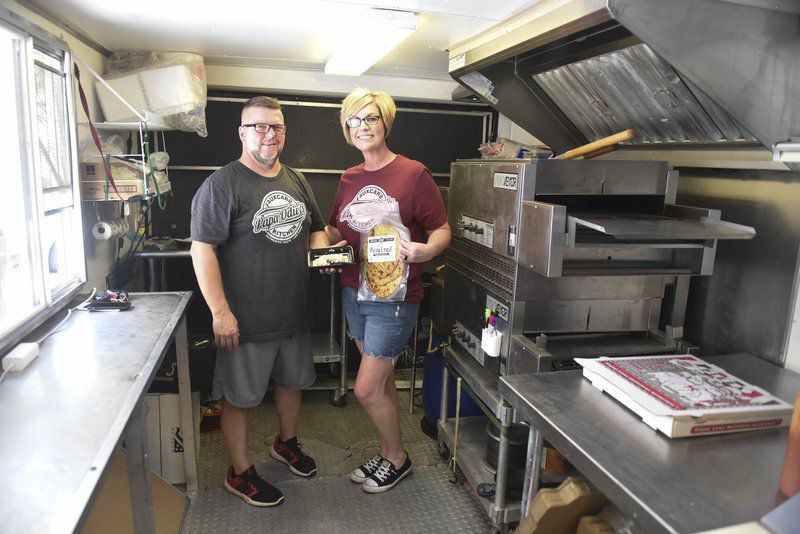 Michael and Shelley Oden in their Papa Odies Fauxcarb Kitchen food truck, where they can make gluten free pizzas, lasagna and biscuits and gravy. Papa Odie's also has a permanent location at 623 N. Broadway St. in Moore, where the Odens make low carb, gluten free food that can be purchased frozen and taken home.

Papa Odie's pizza crusts can be bought frozen from its location at 623 N. Broadway St. Suite C in Moore.

Michael and Shelley Oden in their Papa Odies Fauxcarb Kitchen food truck, where they can make gluten free pizzas, lasagna and biscuits and gravy. Papa Odie's also has a permanent location at 623 N. Broadway St. in Moore, where the Odens make low carb, gluten free food that can be purchased frozen and taken home.

It all started when Michael Oden wanted to keep eating good tasting food.

He had just had gastric sleeve surgery to improve his weight, and his diet from then on out had to be low-carb. But, Michael said, the stigma around low-carb foods is that they don't taste good.

The home chef got to work, and came up with the recipes that would lead to Papa Odie's, a kitchen and food truck owned by Michael and his wife, Shelley. They specialize in food that is low carb and gluten free, but doesn't sacrifice taste.

"It's about having something that no one else has," Michael said.

Since last summer, the Odens have been making their specialty food and selling it frozen from 623 N. Broadway St. Suite C in Moore, a space they share with a bakery. But in the Odie's spot, they use their own ingredients to keep carbs low and gluten out.

In January, Odie's added a food truck. It's more of a marketing tool, something to get the products in front of people as they go about their daily lives.

Michael said Sam's Club in Moore has invited them out at least three times now.

"We believe our product has more of a mass market appeal," Michael said. "We've been trying to get the truck in front of as many people as we can."

Papa Odie's is distinctive because of what the Odens mean by low carb. Michael said that term is much more loose in the marketplace that consumers might think.

"A lot of foods will say low carb, but there's no real criteria for that," he said. "We are truly low carb, under nine-grams per serving."

The rise in popularity of the keto diet -- which is designed to teach the body to burn more fat by eliminating carbs -- has also boosted Papa Odie's popularity, Michael said. The pizzas and pizza crusts, lasagna, garlic bread and biscuits and gravy they serve are well within the keto diet range.

"People on keto can get our food, enjoy the taste and still maintain their regimen," Michael said.

Following his surgery, Michael said he had to start cooking specialty food to take with him to work, which at the time was as a heart scan technician at Oklahoma Heart Hospital.

"I have been the family cook for my whole life," Michael said. "When I had that surgery, that means low-carb for life. I started bringing my food to work, and you know how co-workers are. Well, eventually they wanted to try it."

They loved it. And when word got out, another co-worker approached him about her gluten free diet.

When Michael brought some to work, he said the employee was nervous to try some. Her Celiac's disease meant eating any gluten risked a trip to the emergency room.

But eventually, she gave it a shot.

"She finally tried it and she loved it, and everything was fine," Michael said.

And that's when it hit him. Foods that are low in carbohydrates are often gluten free, but not as many foods marked gluten free are actually low carb.

"Almost all gluten free foods are high in carbs," Michael said. "I knew we had found a niche market."

In gluten free foods, carbohydrates often act as the missing binding agents that mix the ingredients together, so producers use a lot of carbs in those recipes, Michael said. In Papa Odie's food, that's not the case.

A friend of Michael's encouraged him to focus on gluten free because his daughter, 9-year-old Ella, has a severe case of Celiac's disease. Parents of children who have Celiac's will often come to Papa Odie's food truck and it's a hit with the kids, Shelley said.

"He said 'She can eat your food,'" Michael said about Ella. "So that's who we're trying to reach. That's our customer."

It's all about finding the right set of ingredients. While he didn't want to give too much away, Michael said almond flour is a great resource.

The work is intensive. For instance, Papa Odie's pizza crust contains 11 ingredients that have to be mixed right.

But it works. The Odens can tell that by the crowds, some of whom have driven for hours to come find them.

"It's just the two of us," Shelley said. "We don't have enough hands because of the demand."

The Odens are looking for investors to take their operation to the next level, too. Michael even brought his idea to the producers of the hit TV show Shark Tank when it came to Oklahoma City in April of last year.

Shelley said the next big step is to get some of their products into supermarkets. Sometimes they will bring along a large freezer in the food truck so people who buy meals and enjoy it can also take it home with them.