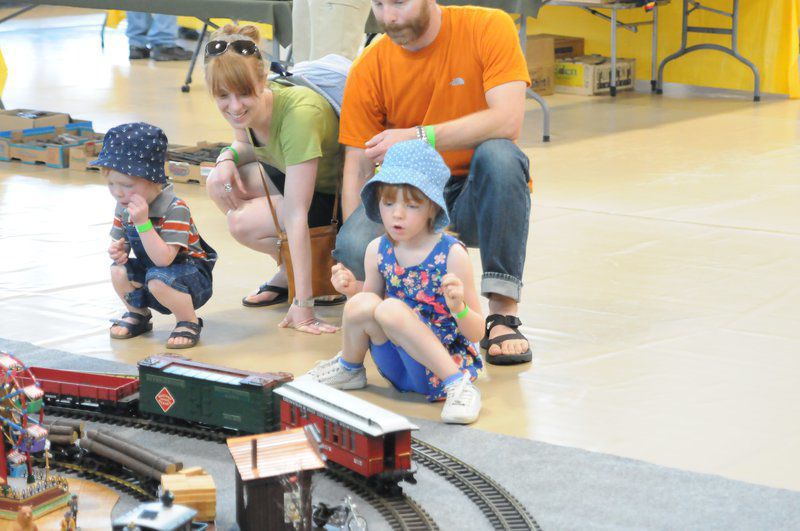 Jonathan and Mary Elizabeth Mach show model trains to their children, Sloane and Forrest, during the inaugural Rail Fest Saturday at The Station in Central Park in Moore. 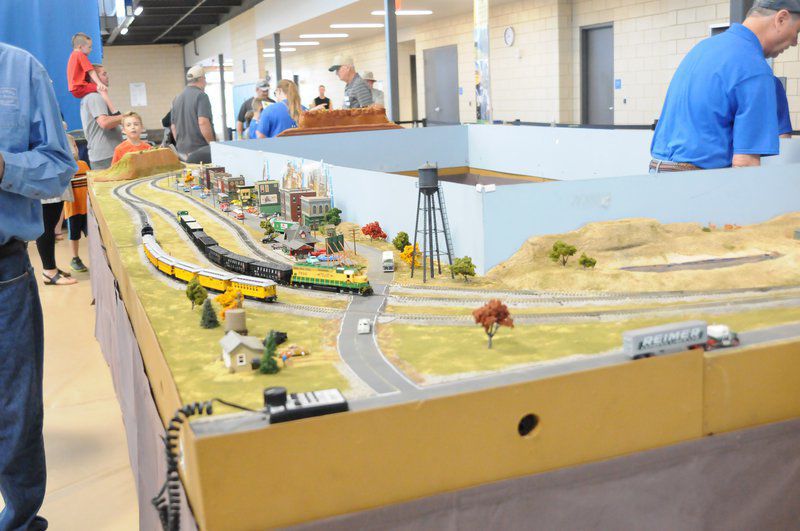 Model train shows and clinics were held as part of the inaugural Rail Fest Saturday at The Station in Central Park in Moore.

Jonathan and Mary Elizabeth Mach show model trains to their children, Sloane and Forrest, during the inaugural Rail Fest Saturday at The Station in Central Park in Moore.

Model train shows and clinics were held as part of the inaugural Rail Fest Saturday at The Station in Central Park in Moore.

Moore’s Rail Fest added some town history to family-friendly fun with a daytime model train show and clinic Saturday at The Station at Central Park.

The show brought exhibitors from across the state and region, including special booths sponsored by organizations like the Oklahoma Model Railroad Association (OMRA). On display were active model train setups of all sizes, along with the opportunity to view virtually every type of railroad accessory and memorabilia.

Phil Howell, president of OMRA’s 60-member local chapter, said the group attends about four events a year and hopes to add RailFest to its regular schedule. He added that the shows are a great way to celebrate Oklahoma’s heritage, which is intricately tied to the railroads.

It’s also a great opportunity to educate the general public on details of the hobby that are usually overlooked.

“People tend to think it’s all about the trains, but for me it’s about the buildings and the scenery,” Howell said. “That’s what’s the special part about this hobby, is creating your own scenery and adding to it. It’s not just about running trains around in a circle.”

Fellow exhibitor and train enthusiast Dave Dudley is a prime example of someone who’s perfected that individual touch. A U.S. Army veteran, Dudley’s dual track featured military-themed trains, along with a freestanding push button that allowed visitors to control one of the trains. Dudley said he’s found that adding the interactive element makes a huge difference in attracting others to learn about his hobby.

For most of the attendees, however, the show was simply a chance to have fun. Joy and Aaron Moseley attended with their three children, Tristan, Emma and Oliver. They spent time looking at the exhibits, tables full of boxcars, model accessories and a huge variety of train-themed merchandise and collectibles.

“The boys are crazy about trains; their room is even decorated with Thomas the Tank Engine,” Joy Moseley said. “They are having an absolute blast.”

For serious model train aficionados, the event also hosted a number of clinics conducted by model train experts, with practical advice on topics ranging from how to get into model railroading as a hobby to building your own tracks and switches by hand, to digital command controls, and more.

Among the clinic instructors was Del City resident Kurt Konrath, who with his wife, Kathy, travels to shows around the region with a massive, intricate display that’s the result of many years' worth of effort. Like Dudley, the Konraths focus on the endless possibilities each model train offers for individual expression.

There’s some challenging work as well, since most dedicated model train enthusiasts create their own terrains, electrical switches and other equipment. The focus, the Konraths said, is on creating forms that are realistic and appealing.

“There’s a real base of railroad fans here (in Oklahoma), and we have a lot of fun with it,” Kathy Konrath said.

Moore Assistant City Manager Todd Jenson spearheaded the efforts to add a daytime train show to the event. He said he hopes to make it a permanent part.

“I’m a model train guy myself,” he said. “Moore’s history is tied to the railroad, and the Station at Central Park is even designed on a railroad theme and is next to the railroad. So it’s appropriate that we’re having a festival celebrating our history.”