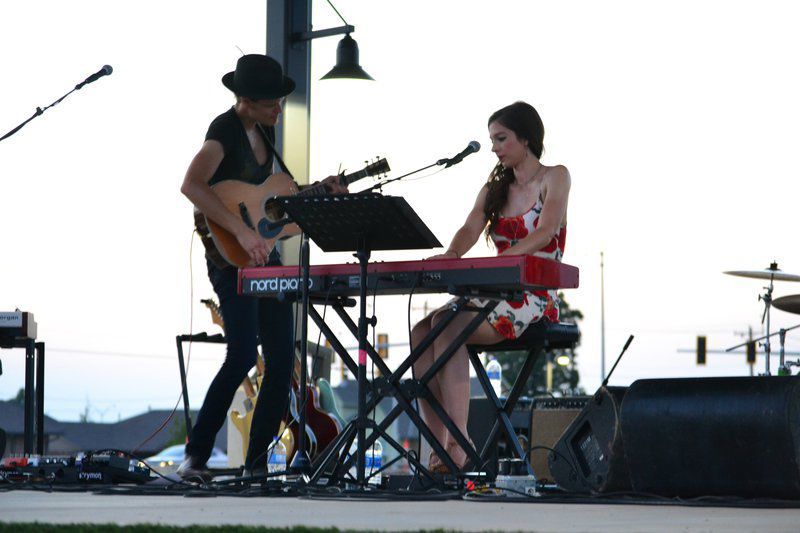 Shane Henry and Maggie McClure play an acoustic set to finish their concert Friday in Moore. 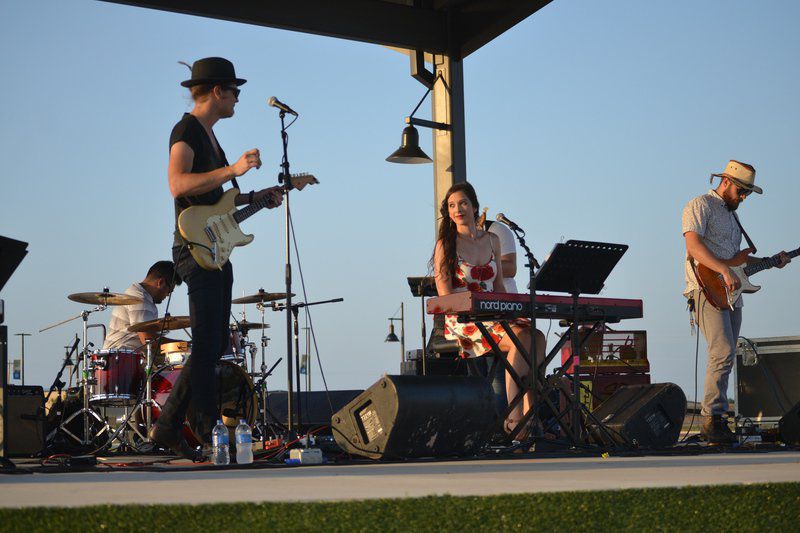 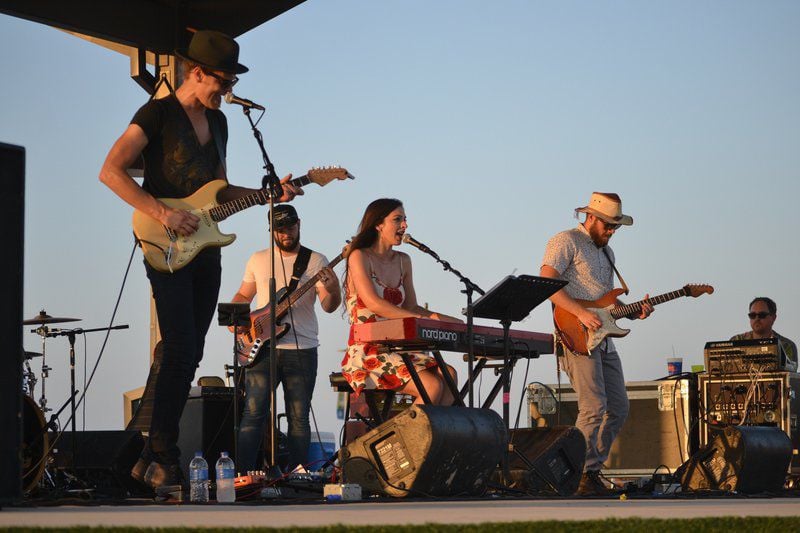 Shane Henry and Maggie McClure perform Friday with their band at a concert in Central Park, part of Moore's Summer Nights Concert Series. 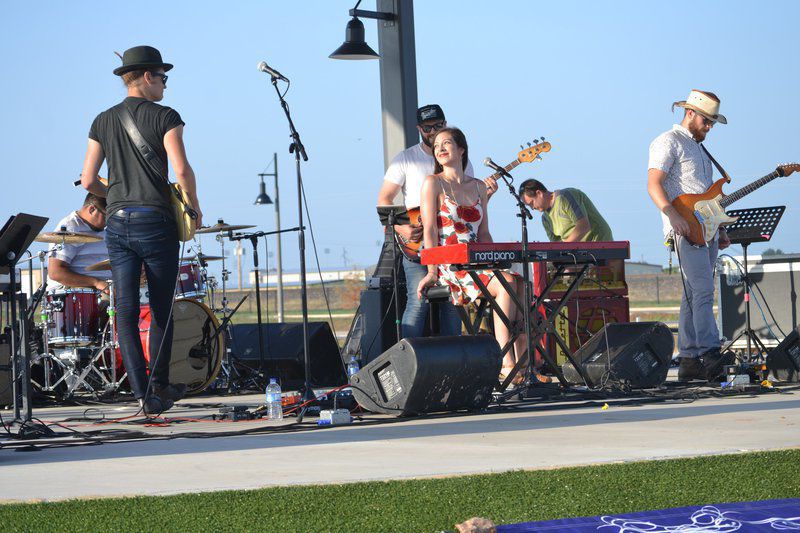 Shane Henry and Maggie McClure share a quick glance while McClure plays her set during a concert Friday at Central Park in Moore. The show is part of Moore's Summer Nights Concert Series. (Adam Troxtell / The Transcript)

Shane Henry and Maggie McClure play an acoustic set to finish their concert Friday in Moore.

Shane Henry and Maggie McClure perform Friday with their band at a concert in Central Park, part of Moore's Summer Nights Concert Series.

Shane Henry and Maggie McClure share a quick glance while McClure plays her set during a concert Friday at Central Park in Moore. The show is part of Moore's Summer Nights Concert Series. (Adam Troxtell / The Transcript)

It was 2004, and budding Oklahoma-born musician Shane Henry was about to perform at the Red Dirt Cafe in Norman.

His longtime keyboardist, Jim Robinson, had been giving lessons to another musician-to-be, Maggie McClure. Robinson wanted to give her a stage and see what she could do with it. He suggested she open for Henry that night.

And there on Campus Corner for the first time and, most definitely, not the last, they met.

“What’s interesting is how Maggie and I came to know each other was through music,” Henry said. “Without music, this never would have happened.”

Now, 12 years, countless shows and wedding bells later, the couple has traveled across the country and swaps Los Angeles for Oklahoma on a regular basis as they look to take their music career to the next level together.

“It’s very special, because I think music is another form of communication,” McClure said. “It’s cool to have that bond with each other. When we’re on stage, we look at each other and we know where the other one is going musically. I realize a lot of other people don’t get to experience that kind of connection.”

It was on full display Friday in Moore, when Shane and Maggie played a set for the Summer Nights Concert Series at the Station in Central Park. Occasionally, McClure smiled while Henry went off on a guitar riff or solo.

Henry also admired his wife as she belted out powerful notes in songs full of lyrics straight from the soul.

The show was the second to last listed on a spring tour. The pair and their full band will play one last concert July 1 at Othello’s in Norman. The tour began in May at The Hotel Cafe in Los Angeles, and both musicians are excited to have it finish closer to home.

“It is a breath of fresh air to come home, perform to a hometown audience,” McClure said. “People are so appreciative here, kind and warm.”

While their music now takes them across the country together, Henry’s journey began as more of a solo effort. Growing up in the small town of Verden, west of Chickasha in Grady County, he was playing shows locally at just 15 years old.

An opportunity to try out the Minneapolis music scene arose while he was still in high school, but he had to finish first.

“I moved to Chickasha so I could graduate early and head up to the Twin Cities,” Henry said.

By 2003, at age 19, he opened for B.B. King on the famous musician’s national tour, molding his heavy-blues style. He had spent time in Seattle, with Robinson on keyboard as he had been since 2001.

They returned to Oklahoma and booked the show at the Red Dirt Cafe, at what is now Pepe Delgado’s. Robinson suggested Henry have McClure as an opening act.

It went well and the two became acquainted. Over the years, they played more shows together, especially after McClure was picked up to do college campus tours, playing somewhere between 50 and 60 shows.

Henry racked up 30 to 40 shows on similar tours, and as they grew older musically, they began to grow together.

“We just toured together so much for the last six years that you can’t really help but get tight with that person,” Henry said about their more recent tours together. “We’ve probably played between 500 to 1,000 shows together. I think we’ve hit that 10,000-hour rule where we’ve figured it out.”

After years as friends, McClure said, they began dating. In 2011, they tied the knot, and Henry’s blues-rock style meshed perfectly with pop-rock, singer/songwriter McClure.

“I think it naturally meshed very well,” McClure said. “At the heart of it, we’re both songwriters. Every song starts with a guitar, piano and voices. We write and co-write all of our music. Our styles are pretty different, but when we play together, it’s a new thing. It’s been fun to play shows together as a duo and as a band.”

It also made playing some shows a little easier, Henry said.

“I don’t know that it changes anything, but I will say there’s definitely times when we have certain shows and we have a way of calming each other’s nerves,” he said.

And even after a decade of playing together, nerves are still a thing. Shows they play in Los Angeles are different to those elsewhere. Making an impression on the right people is much higher up the priority list, and the atmosphere can be much more demanding.

“Playing shows in Hollywood, we’ll play at some of the prestigious songwriter venues,” Henry said. “A lot of times, we’re inviting out industry people, and it can be a little pretentious. That’s not who we are, but that’s the territory of living in a music city and making it happen.”

But that’s not what they get while playing in places like G-Fest in Muskogee last Thursday, Moore on Friday, Norman or Oklahoma City.

“You’re at home, you can breathe easy, and it makes that struggle worthwhile,” Henry said. “You know there are people back home who appreciate what you do.”

On Friday, McClure played songs from her latest album released in 2014, “Time Moves On,” some of which have been featured on TV shows on CBS, TBS and MTV. Henry led a second set with songs from his 2010 release, “Beauty in the Struggle,” and a few songs from his new album, “Light in the Dark,” which was available at Friday’s show but will be officially released in the fall.

They ended the night together on stage, alone, playing an acoustic set. It included the song they wrote about the 2013 tornado recovery, “Carry Me, Carry On,” in front of a crowd who knew its impact more than anyone else.

“Our agent at the time, I don’t think he even knew what a tornado was,” said Henry, who was with McClure in Los Angeles at the time. “We both had friends stuck in storm shelters, so it was something that hit very close to both of our hearts.”

After July 1, the couple will go back to the grind of playing hundreds of shows and pushing their music in as many directions as they can. Nothing will ever top playing at home, where they can strike the right chord for an audience they know.

They are the same chords that brought them together years ago and keep them going today.

“There’s nothing like performing a live show,” McClure said. “In a perfect world, I’d love to play shows all of the time. It’s not just how you sound, it’s how you look, how you connect with the audience.”

The Summer Nights Concert Series wraps up June 24 with Riders Ford at 7 p.m. at the Central Park Pavilion and Amphitheater.

Billy Richard Craig II "Rick" joined his Savior Jesus Christ in heaven on April 3, 2020. Rick was the firstborn of 6 sons to Bill and Betty Craig. He was born on November 28, 1951 in Sherman, TX. He graduated from Moore High School in 1970. In school he became an outstanding all around athle…