ENID, Okla. — The Rev. Mark Mason, lead pastor to the Catholic community in Enid and Goltry, has improved slightly over the last two days in his fight against COVID-19, his associate pastor reported Tuesday.

Mason has been quarantined with the virus for more than two weeks and is in intensive care. On July 11, the Rev. John Herrera, associate pastor of St. Francis Xavier and St. Gregory the Great in Enid and St. Michael the Archangel in Goltry, posted to the Catholic community's Facebook group that Mason's condition had worsened over several previous days.

The Rev. Mark Mason was home long before he became the new lead pastor at St. Francis Xavier Catholic Church in Enid in July 2018. His relationship with the church reaches back to his school days.

But on Tuesday Herrera said Mason was "a bit better" than Monday and had improved somewhat on Monday over Sunday.

"That is really good news, but he is not out of the woods yet," Herrera said. "We are asking people to continue praying for him.

"Our hope is if it's the Lord's will, he will return to us soon," Herrera said. "It may be a bit of a process of recovery. We're hopeful, and we continue to pray, and we're very grateful for the devout outpouring of prayers for Father Mason in the meantime."

Herrera said everyone who came in contact with Mason before he was quarantined has been notified, and Catholic services continue, following safety precautions mandated by the Catholic Archdiocese of Oklahoma City.

"We intend to continue proceeding with public liturgies," Herrera said. "We're following the lead of the archbishop, and we continue to put our trust in God."

Mass is continuing across the archdiocese, following a mandate last week that all parishioners and clergy wear masks to all services and church gatherings.

We need urgent prayers for one of our priests who is in the ICU with COVID-19 and is struggling.

Posted by Archdiocese of Oklahoma City on Saturday, July 11, 2020

In his July 9 “Letter to the Faithful,” Archbishop Paul Coakley attributed the rule to the recent surge in COVID-19 cases.

“Since early June, the number of cases of COVID-19 in Oklahoma have increased rapidly, affecting many of our family members, friends and more than a dozen priests, some of whom have spent time in the hospital,” Coakley wrote. “This increase has prompted civic leaders and health authorities to seek further protections to slow the spread of the virus as we head into summer.”

Diane Clay, director of communications for the archdiocese, said the mask mandate and other safety precautions are being taken to protect clergy and parishioners, and in hopes of keeping in-person Mass available. 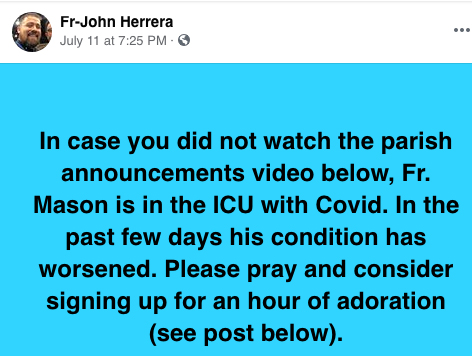 “We have asked for prayers for several of our priests who have become ill with COVID-19 over the past few months," she said. "Two have spent time in the hospital and one is in intensive care. Their health and the well-being of all parishioners has led to precautions to slow the spread of the disease, including social distancing, restrictions on large gatherings and the recent directive from Archbishop Paul Coakley that everyone at public Mass wear a mask or face covering. Ultimately, we hope these provisions, along with precautions set by civic leaders, will keep in-person Mass available, and we won’t have to suspend it again.”

The COVID-19 safety precautions for Catholic Mass are available on the archdiocesan website https://archokc.org/mass.

Mason graduated from St. Joseph Catholic School in 1967 and was ordained to the priesthood at St. Francis Xavier on June 27, 1975. He returned to Enid as the lead pastor in 2018.

Neal is health, military affairs and religion reporter and columnist for the Enid News & Eagle. Follow him on Twitter, @jamesnealwriter, and online at jamesrneal.com.
Have a question about this story? Do you see something we missed? Do you have a story idea for James? Send an email to jneal@enidnews.com.
News