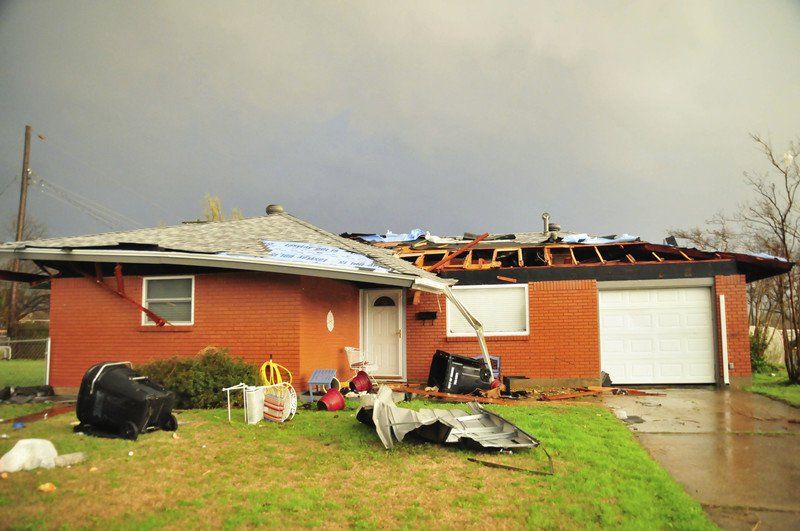 Homes in a neighborhood off of Telephone Road sustain damage after a tornado that passed through Moore Wednesday, March 25, 2015. 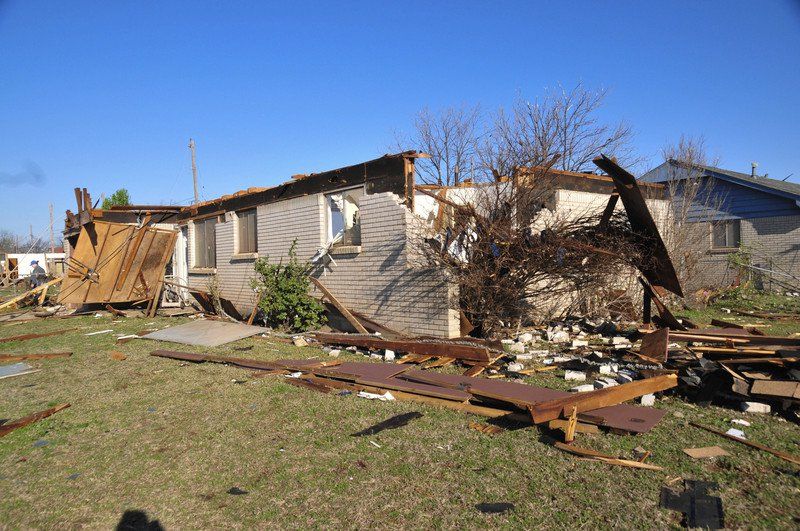 City leaders in Moore hope new building standards adopted on March 17, 2014 will help prevent some storm damage. In this file photo, homes near Southgate Elementary show significant damage from a storm on March 25, 2015. 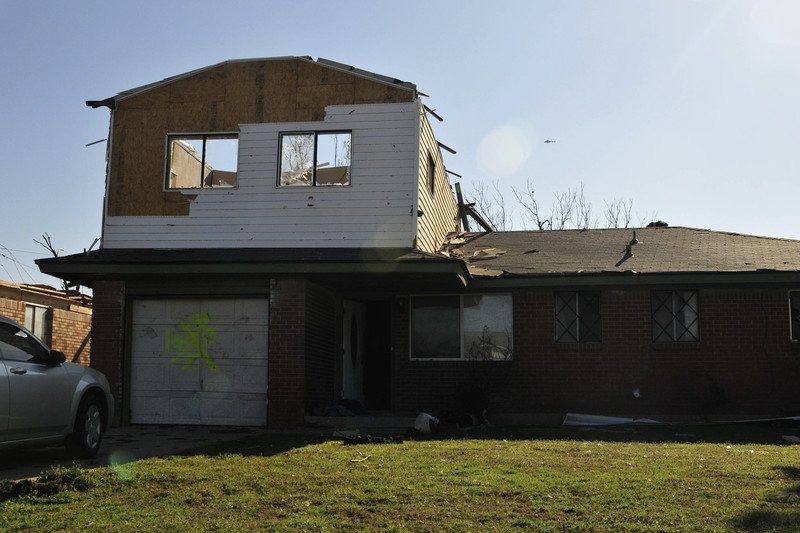 Homes around Southgate Elementary sustained damage from the tornado that touched down in Moore on March 25. 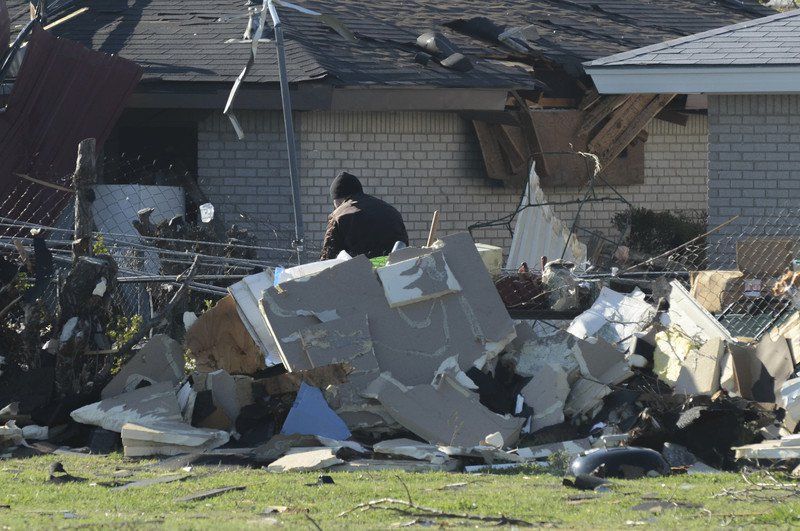 A man goes through the damage at his home after a tornado touched down in Moore, Wednesday, March 25, 2015. 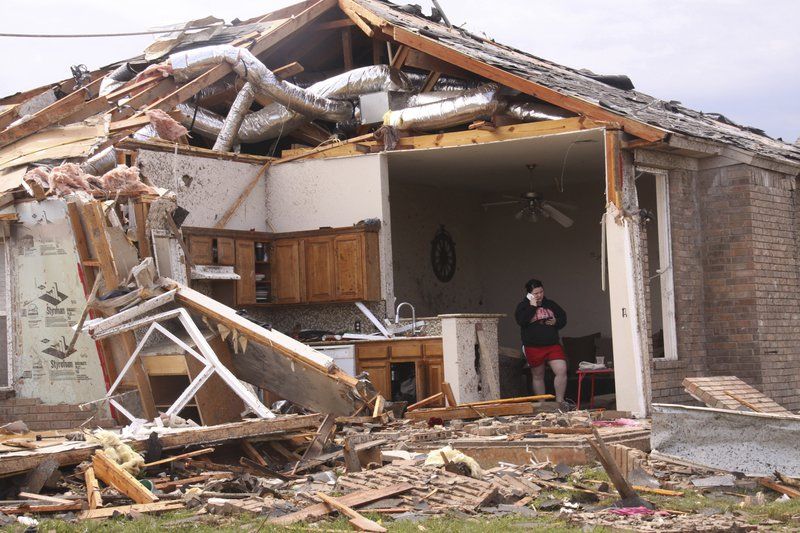 In this file photo, a Moore resident searches through her home one day after a deadly tornado leveled much of the surrounding neighborhood.

Homes in a neighborhood off of Telephone Road sustain damage after a tornado that passed through Moore Wednesday, March 25, 2015.

City leaders in Moore hope new building standards adopted on March 17, 2014 will help prevent some storm damage. In this file photo, homes near Southgate Elementary show significant damage from a storm on March 25, 2015.

Homes around Southgate Elementary sustained damage from the tornado that touched down in Moore on March 25.

A man goes through the damage at his home after a tornado touched down in Moore, Wednesday, March 25, 2015.

In this file photo, a Moore resident searches through her home one day after a deadly tornado leveled much of the surrounding neighborhood.

Moore Strong is more than just a slogan to raise moral following the devastation of the May 20, 2013 tornado. Homes in the growing city will literally be stronger than their predecessors, after Moore became the first city in the nation to adopt tornado safe building codes.

The Moore City Council made history on March 17, 2014 with the adoption of 11 recommendations by structural engineering experts for residential building codes. These code changes will make future new homes in Moore more likely to survive a tornado without unduly raising construction costs.

“These changes were discussed at a Moore builders meeting,” Community Development Director Elizabeth Jones told council members. “This is not intended to be a storm shelter/house. Residents should still take appropriate shelter when a tornado warning is issued.”

The code went into effect on April 17, 2014. Since that time, 217 residential building permits have been issued in Moore.

As adopted, the 11 suggestions were broken down to create 14 code amendments based on research and proven engineering technology proposed by civil engineers Chris Ramseyer and Lisa Holliday.

While homes have traditionally been rated for 90 miles per hour winds, garage doors were not required to be wind rated and created a weak spot that could lead to greater structural damage in severe weather. That is a key area addressed in the new code which requires that garage doors be wind rated.

“What you had in Wildflower was better construction that allowed it (the EF-2 damaged home) to stay intact,” Ramseyer said.

Wildflower homes were vacant and incorporated many of the factors that are included in the new upgraded building code. Under the new code, homes will be wind rated for 135 mph and be more capable of surviving tornadoes, especially up to EF-3.

“The homebuilders are accepting this as a good thing,” said Marvin Haworth, Moore Home Builders Association. “We think this is going to improve the quality of homes in the Moore area. We feel like it is going to address the problems we have with tornadoes.”

Ramseyer is the director of OU’s Fears Structural Engineering Laboratory, where structural theories are put to the test to gain real-life answers grounded in science.

The city of Moore asked Ramseyer to provide recommendations for a rational or scientific approach to high-wind design. Ramseyer specializes in structural design and teaches steel and concrete design classes to undergrads as well as graduate students at the university.

“We have photos that show two houses with EF2 damage 69 feet away from a house where the slab was swept clean. Both houses were built with the same construction techniques,” Ramseyer told city leaders. “This points out that we should be able to narrow the damage zone for an EF-5 tornado significantly, allowing more people to survive and consequently, less overall destruction.”

Residential building codes in Oklahoma are based on the 2009 International Residential Code that requires homes to withstand 90 mile per hour winds in three-second gusts.

Ramseyer’s finding are based on International Building Code standards which are higher standards developed for commercial buildings rather than the IRC standards. Findings are also based on tests performed at the Fears lab.

Ramseyer was part of a National Science Foundation team that looked at tornado damage. As a structural engineer, Ramseyer and the team tried to answer the question, “How does a tornado interact with a house?”

The team was composed of five universities with 25 students and faculty participating, each with different specialties. The team found a neighborhood in south Oklahoma City that was hit by the May 20 tornado. That subdivision was new and all of the homes were unoccupied. Ramseyer said the houses were “robust structures.” The builder, Ideal Homes, is known for constructing homes with tornado safe elements.

“They use a very nice bracing system and clip system,” Ramseyer said.

That vacant neighborhood — the Wildflower addition — provided just what the team needed to study how a tornado interacts with a residential structure.

Two of the homes were completely wiped off the foundations, one was piled with debris and two other homes were standing but had some damage.

Wind speed within a tornado can’t be measured. The Enhanced Fujita Scale rates the strength of tornadoes based on the damage they cause and wind speeds are estimated by that damage.

In the Wildflower housing addition, there was only 70 feet between the house that suffered EF-5 tornado damage and the home that suffered EF-2 wind damage.  That was something the team found surprising and shocking.

While these upgrades make homes more likely to survive tornadoes, the code changes do not make homes a safe shelter for residents in major tornado events.

“For true safety, you have to be in a shelter,” Ramseyer said.

The code changes will help homes — and the property contained in those homes — have a greater chance of surviving Oklahoma’s most extreme weather events, at least up to EF-3.

By making a house more likely to survive a tornado, it also protects neighboring homes because a destroyed home results in debris that is thrown at other homes, inflicting damage to those nearby structures, Ramseyer said.

While Oklahoma has great early warning systems, there are also people who get caught off guard and may be in their homes when a tornado strikes. Additionally, pets may be in the home and at risk.

Ramseyer stressed people should stay informed about weather and be prepared to take shelter.

“The state of Oklahoma is better prepared then any other state as far as notifications,” he said.

In very simple, layman’s terms, the 11 residential building code include:

1. Roof sheathing — larger nails, closer together with sheathing of OSB or plywood

5. Gable end wall construction — use OSB or plywood sheathing with 8d ring shank or 10d nails on four inches on center along the edges and six inches on center in the field (bigger nails, closer together)

8. Wall sheathing — using continuous sheathing on all walls. Garage doors are to be framed using the sheathed portal frame method. No form of intermittent bracing is allowed on an outer wall.

10. Sheathing detailing — extend structural wood sheathing to lap the sill plate (this is specific to a type of foundation seldom found in Oklahoma)