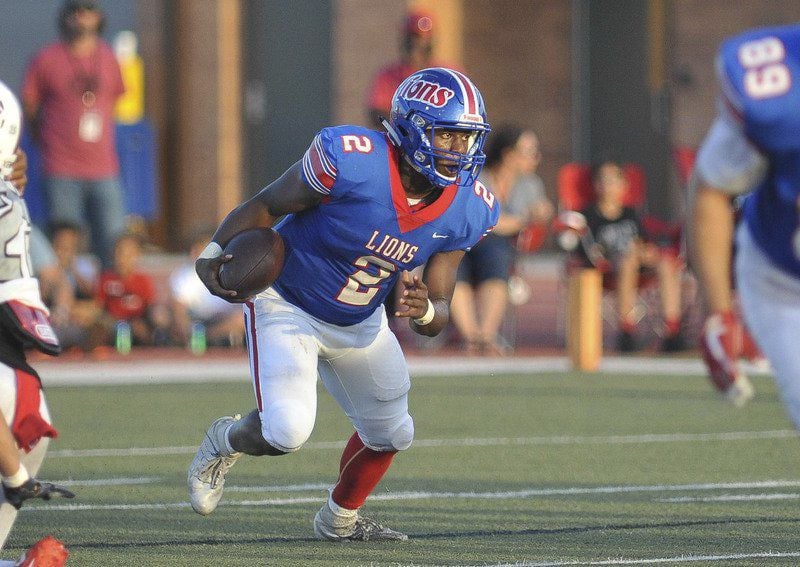 Moore's Daniel Hishaw runs with the ball during the Moore War game Aug. 31 at Moore Stadium. (Kyle Phillips / The Transcript) 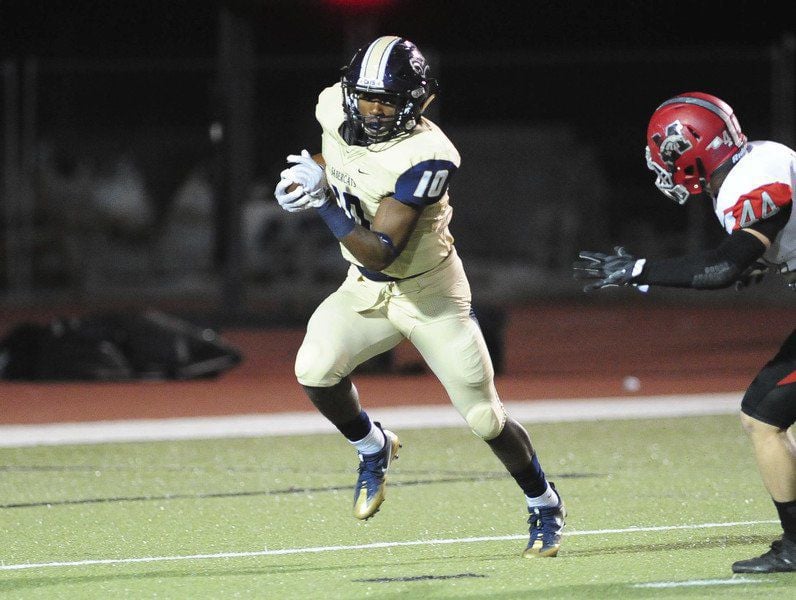 Southmoore's Donovan Gaines runs with the ball against Mustang on Oct. 26, 2017, at Moore Stadium. (Kyle Phillips / The Transcript)

Moore's Daniel Hishaw runs with the ball during the Moore War game Aug. 31 at Moore Stadium. (Kyle Phillips / The Transcript)

Southmoore's Donovan Gaines runs with the ball against Mustang on Oct. 26, 2017, at Moore Stadium. (Kyle Phillips / The Transcript)

This week’s Moore-Southmoore game has plenty on the line, not just for bragging rights between the two neighboring schools but as the district opener for each school.

But it takes on even more for Donovan Gaines and Daniel Hishaw Jr. It’s a family affair between the two cousins, each star players for their respective teams.

“It’s nothing new, we compete in everything we do,” Hishaw said. “It will just happen to be out here (on the Moore Schools Stadium field) this time.”

“When we were young we always competed,” Gaines said. “I was a little older so we ended up on different teams but I still want to see him do well, I’m happy to see him happy for me and my success. When the game comes, it’s going to be fun and intense.”

They’re going to be on the field at the same time a lot. Gaines plays both ways for Southmoore and while Hishaw primarily has played quarterback for Moore, he also has seen quite a few snaps in the defensive backfield.

When they’re able, one is there to support the other on game nights. But Friday, at least for 48 minutes, they’ll have a different goal – try to earn an important victory and some bragging rights.

“During the game it’s all business,” Hishaw said. “But at the end of the day it’s all family, we’re gonna be cousins.”

• Road woes: Westmoore and Southmoore both played away from their home stadium for the first time, and both had to endure bus rides home after defeats.

Westmoore fell 21-14 at Mustang, losing its first game The Jaguar offense struggled against the Broncos, managing just one touchdown – a 21-yard pass from Dayton Wolfe to Dylen Taylor – and two Ryan Knight field goals on the night.

Southmoore ran into a buzzsaw in Stillwater, a team on the short list of favorites to win Class 6A-II this year, falling 49-15. Quarterback Gunnar Gundy threw for 228 yards and three touchdowns while running for a fourth score as the Pioneers jumped all over Southmoore to get out to a 35-0 lead by halftime.

The Sabercats got fourth-quarter touchdown runs from Gaines and Corey Durham as well as a safety to avert the shutout.

• Tough step up: Westmoore is back on the road again, traveling north to face Enid, a newcomer this year in Class 6A-I.

It’s a tough step up for the Plainsmen (1-2), who have struggled the last few years in 6A-II, going just 13-27 in the first four years of the 6A division split.

Enid has beaten Ponca City and lost to 5A schools Guthrie and Bishop McGuinness.

• Loccident update: By now many football fans have heard the tragic story about Derek Loccident, the University of Central Oklahoma football player who lost his foot in an accident involving a train in downtown Oklahoma City on Sept. 9.

Loccident is a former Westmoore wide receiver and defensive back who also ran track for the Jaguars from 2012-15. He redshirted his 2016 season at UCO before playing defensive back in 2017.

Loccident was in a starting role this year. He was tied for the team lead in tackles through the first two games of the season, but football seems secondary now.

Students have organized a fundraiser “Desserts for Derek” at 4:30 p.m. Saturday, in the west parking lot of Wantland Stadium, prior to UCO’s game against Northwest Missouri State. All proceeds will go to aid Loccident and his family with medical costs.

There also is a Gofundme page to help the family established at www.gofundme.com/derek-loccident-medical-assistance.