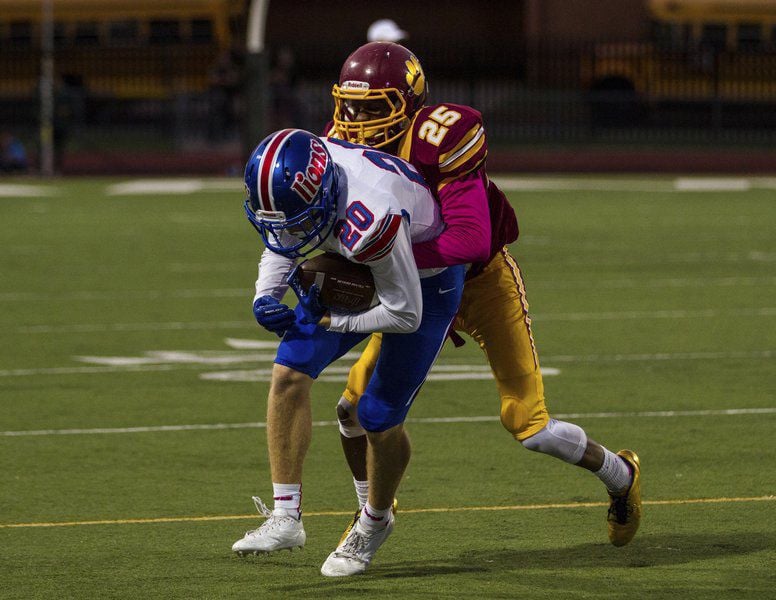 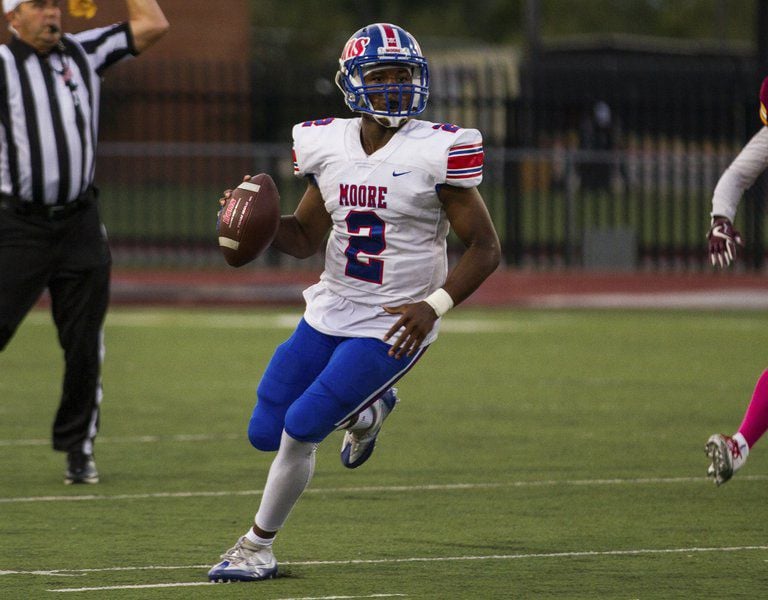 WARR ACRES — Quarterback Daniel Hishaw Jr. might be Moore's most explosive player, but the Lions need more than one guy to power their offense.

Coach Brad Hill knew that going into Thursday's game against Putnam City North, and with the sophomore's back hurting in the locker room at Putnam City Stadium, it was now or never.

Hill made a few changes and after a sluggish start, the offense came to life in a 48-17 Moore victory. For the first time since 2007, the No. 10 Lions (3-2, 2-0 District 6AI-2) have won three straight games, and for the first time in that stretch, Hishaw wasn't the team's only offensive weapon.

Moore had four receivers catch multiple passes, and running backs Jayce Gardner and Tony Fogle combined to rush for more than 100 yards, leading to a season high in points.

The Lions started the game with three punts without recording a first down, and Putnam City North receiver Grant Lyda took a short pass 93 yards for a touchdown to take the lead.

A controversial spot forced PC North (1-4, 0-2) into a fourth and what couldn't have been more than inch, without the refs measuring, at Moore's 32. The Panthers went for it, and Moore's defense swallowed quarterback Aaron Norment in the backfield. Up 14-8 at that point, a touchdown for PC North could have led to a different game.

“Our defense won the game for us,” Gardner said. “I'm very confident in my team. They know I've got their back, I know they've got mine. I always have faith in us”

Moore put in Hishaw's backup, Cameron Allen, who is more of a pocket passer, to lead the offense with 40 seconds left. Five plays later, the Lions found the end zone, on a Hishaw 2-yard run, with three second showing on the scoreboard. It was tied going into halftime, and Moore didn't let the momentum slip away.

The Panthers gained just two yards on the second half's opening drive and Moore, with Hishaw accounting for 58 yards on five carries, drove for a touchdown, taking the lead for the first and final time.

Moore didn't throw a pass in the second half, trying to bleed the clock, so Allen finished 4 for 8 for 58 passing yards with an interception, most of it coming on the touchdown drive before half. Receiver Orlando Green was dynamic, rushing four times for 23 yards and catching two passes for 53 yards. Receiver Braden Sloane led Moore with four catches for 42 yards, and Dylan Buchheit added 32 yards on two catches.

While none of those statistics are eye popping. They do relay an important message. Moore needed to give Hishaw, who also starts at cornerback, some help. The Lions have the weapons, maybe now they've figured out how to use them.

“Every player we have is a weapon, and we're going to pull out the whole arsenal on them,” Gardner said. “There's nothing they can do to stop it.”