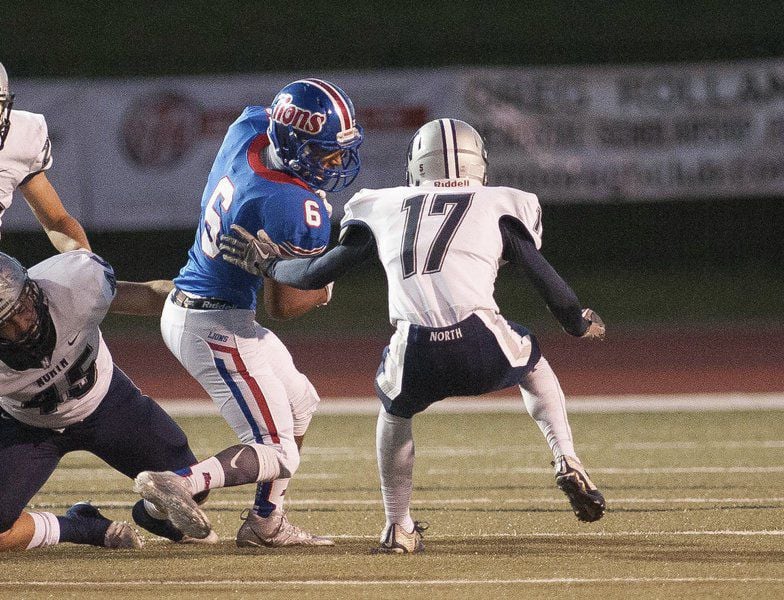 Moore High's Tony Fogle runs with the ball during the Lions' game against Edmond North, Thursday, Oct. 19, 2017, at Moore Stadium. 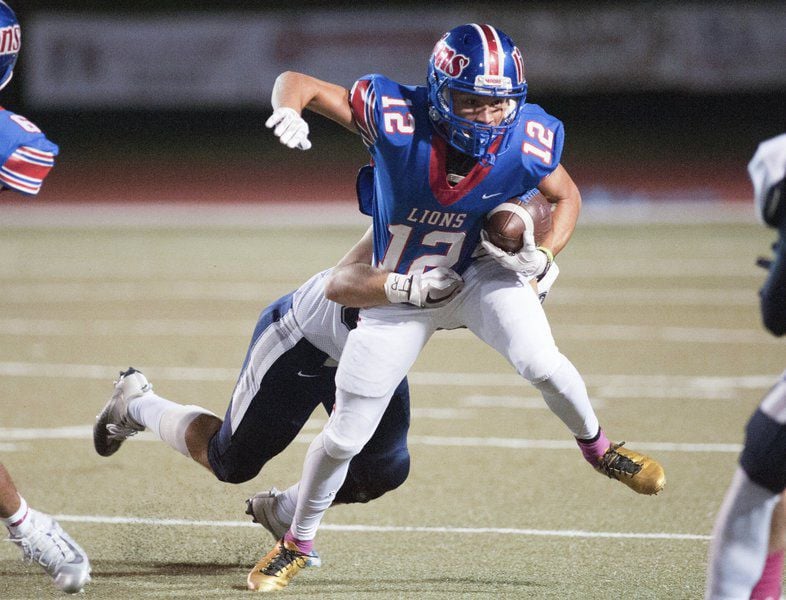 Moore High's Orlando Green runs with the ball during the Lions' game against Edmond North, Thursday, Oct. 19, 2017, at Moore Stadium.

Moore High's Tony Fogle runs with the ball during the Lions' game against Edmond North, Thursday, Oct. 19, 2017, at Moore Stadium.

Moore High's Orlando Green runs with the ball during the Lions' game against Edmond North, Thursday, Oct. 19, 2017, at Moore Stadium.

MOORE — It may not be the end of the world, but it sure must have felt like it on the Moore sideline after Thursday’s game.

That sentiment was written on the faces of Lions players and even some coaches after Edmond North (3-5, 2-3) left Moore Stadium with a 45-36 win. After all, a victory in this game would have eliminated any doubt that Moore (4-4, 3-2) would end its 13-year playoff drought.

The math is still stacked in their favor. But this one would have really meant something.

“This one hurt. It hurt bad,” head coach Brad Hills said. “We knew if we won it, we clinched, and that’s how we approached it. It didn’t go our way. That’s what’s on their face, and our coaches’ faces.”

The game ended for the Lions the way it began. Leading by two, the Huskies marched down the field with minutes remaining behind some of Alex Smith’s 50 yards rushing on 10 carries. Ben McNaughton, who connected on 10 of 27 pass attempts for 242 yards and two passing touchdowns, then snuck it in from a yard out, one of his three rushing touchdowns.

That made the deficit nine, and it was game over with a few minutes remaining.

“We did a good job of fighting back,” Hill said. “We did some good things to give us a chance, give us the win, but in the end they made some plays and we didn’t. Part of it is I probably overhyped the game, saying we had the chance to clinch it. I probably put too much emphasis on the game. You can put that on me.”

But the way the game played out, there was no telling where the pendulum would swing in the end. Moore had fought back from 14 points down, took a one-point lead in the third quarter and had quarterback Daniel Highshaw Jr. rack up 277 yards passing, completing 16 of 30 attempts for three touchdowns.

And eight of those passes were to Drew Johnson, who racked up 131 yards to lead the Lions.

“Drew had a really good week,” Hill said. “We moved him to a different receiver spot tonight. Defensively they were trying to take away the quarterback running game, which they did a good job of doing. But it left the guy isolated over there, and Daniel was able to hit him. We hit some things in the air.”

Penalties plagued Moore early, in fact right from the opening play of the game. Highshaw Jr. thought he had the perfect start on a 77 yard pass play, but an illegal procedure brought the play back.

A personal foul on Moore helped Edmond North to its first score of the game, an 8 yard pass from McNaughton to Jack Cheap, and holding calls plagued the Lions on their next two drives.

After failing to find the target on his first four passes, Hishaw connected on his next passes to add an extra dimension to Moore’s offense. When he found Johnson on 7 yard touchdown pass, it was the start of something good.

Johnson almost had his second touchdown catch when he was held at the 1 yard line just before halftime, and Hishaw ran it in on the next play. By then, McNaughton had added his second rushing touchdown of the night and the Huskies led by eight at the half.

But things then got a little weird for Edmond North and a lot better for Moore.

The Lions defense came out swinging, forcing McNaughton into his own end zone where he scrambled outside but only because of a blatant hold in the end zone. The flag meant a safety to Moore, but it didn’t end there.

McNaughton then fumbled the ball as he scrambled out, and Hishaw picked it up. The Lions committed a chop block in the melee, so the Huskies kicked off to them from the 40.

No matter for Moore. Hishaw found, who else, but Johnson for a 40 yard pass play, and Tony Fogle followed that up with a 22 yard touchdown run to give Moore its first lead of the night.

Fogle ended the night with 70 yards rushing to lead Moore.

An Eisel field goal gave it back to the Huskies, and Tyler Parrott’s pick-6 from about 20 yards out established the nine-point deficit that eventually sealed Moore’s fate.

Hishaw passed the Lions down the field one last time to make the last few minutes interesting, finding Tahliq Jackson for an 8-yard touchdown pass. But the Huskies answered again.

The pendulum, unfortunately for Moore, wasn’t done swinging. With second-ranked Owasso and equally as daunting Norman North coming up in the next two weeks, the Lions will hope it’s not done swinging for their season.