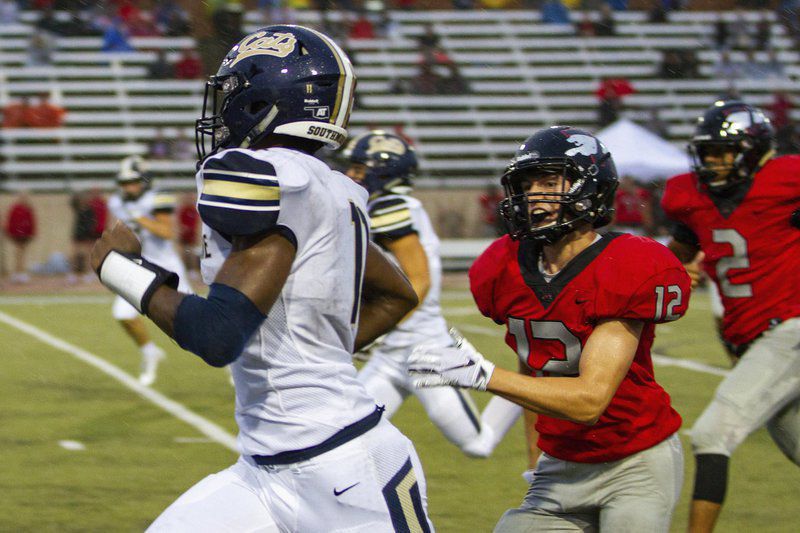 Southmoore's Jaedyn Scott runs down the field with the football during the Week 2 Southwest Showdown football game at Moore Stadium. 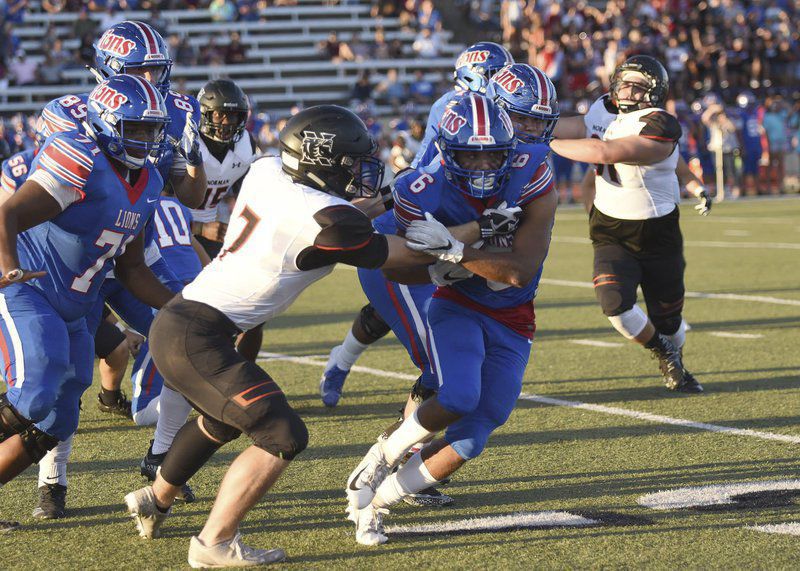 Southmoore's Jaedyn Scott runs down the field with the football during the Week 2 Southwest Showdown football game at Moore Stadium.

The Southmoore-Moore rivalry, renewed this Friday at Moore Stadium, has taken on more meaning in recent years.

Sure, it doesn't draw the crowd of the annual Moore War, or the hype of being the city's oldest rivalry. However, it has the massive playoff ramifications that the Moore War and Southwest Showdown, Southmoore versus Westmoore, don't.

Since the Class 6A-I split, before the 2014 season, the Lions and SaberCats have shared a district. Each year, the winner of the Moore-Southmoore district game has gone on to make the playoffs. That might be the case again this year, when, as Moore coach Brad Hill puts it, the district is “pretty wide open.”

“It seems like it's going to be pretty competitive,” Hill said. “You could be 7-0 or 0-7, and you definitely want to start off positively.”

Unfortunately, too often it hasn't been that way. The top spots have been owned by a rotation of perennial powers Owasso and Union and between Norman North and Mustang, which have both had recent runs of success, there hasn't been much up for grabs. Usually, one final playoff spot is available. That has given even more meaning to the Southmoore-Moore game, serving almost as a playoff disqualifier for the loser before the calendar even hits October.

“Yes, we want to beat Westmoore,” Stark said. “But at the end of the day, it doesn't mean anything. It really doesn't, because it doesn't count in our district standings. So, yeah, it's our rival. Yeah we want to beat them, because they're a district school, but I'd much rather win this game, whoever it is, in Week 1 of district.

“So yeah, this is a bigger game in those terms.”

That's why there's so much preparation in the first three weeks.

What some coaches compare to preseason games, they are all a build up to the fourth. In a 32-team Class 6A, where district wins were more abundant, rivalry games had more emphasis. Now, it's hard for them, even big ones, to not take a backseat to districts and the playoffs.

“Now, every game is a team that could beat you if you're not fully prepared,” Stark said. “I think it does take away from those [non-district games], because you don't have any off weeks during district play. You've got to bring it every single week or you're going to be left out.”

The coaches are fine with this not changing, but some players sure wish it would. Even though his team has lost 18 straight to Westmoore, Moore receiver Dylan Buchheit wishes there was a little more than just pride on the line when the two play. Instead, the loser can just shrug their shoulders, knowing that the outcome has no lasting ramifications.

“We definitely preach to our kids that it's all about Week 4 and not about Week 1, and I don't know, maybe that's why Week 1 has not gone very well for us,” Hill said. “But we look to Week 4 and try to be as good as we can be by this week, and that's been the goal.”

Of course, there is more pride on the line when Westmoore faces Moore, which have been playing since the 1990s. Even Southmoore-Westmoore, which for a long time have shared a feeder middle school, carries a little more emotional baggage. However, the Southmoore-Moore has more to it than pride. It has a lasting impact, one that is felt from mid-september all the way to the final week of the season and beyond. Last year, Moore ground out a 17-10 victory over a SaberCats squad that finished winless. The Lions went on to make their first playoff appearance since 2005.

“They knew they were getting us in a down year,” Stark said. “They smelled blood in the water and took advantage of that. They felt they had a chance going into that game. I don't know if in years past they always felt that way. It was a close game. It could have been a different story for them and a different story for us too.”