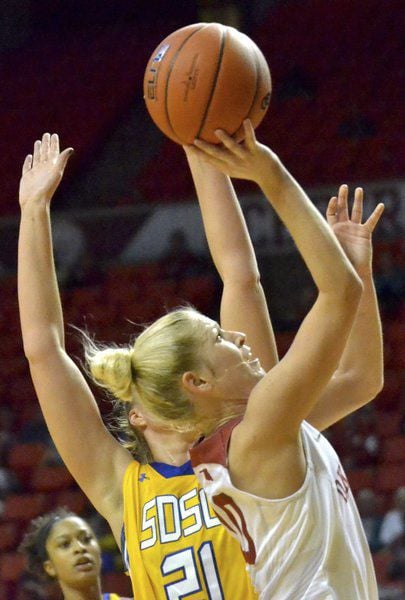 Peyton Little goes up for the shot Wednesday during the Sooners' victory over South Dakota State at Lloyd Noble Center. 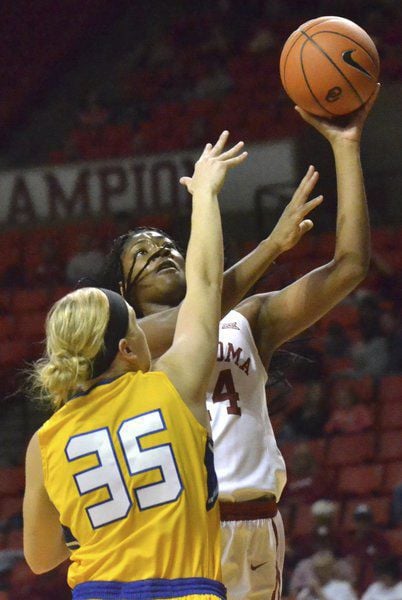 Ijeoma Odimgbe scores in the paint Wednesday during the Sooners’ victory over South Dakota State at Lloyd Noble Center.

Peyton Little goes up for the shot Wednesday during the Sooners' victory over South Dakota State at Lloyd Noble Center.

Ijeoma Odimgbe scores in the paint Wednesday during the Sooners’ victory over South Dakota State at Lloyd Noble Center.

Sherri Coale’s Oklahoma women’s basketball program always seems to begin the season in the polls. Lately, however, they haven’t stayed there.

Change may be afoot.

Four days earlier, they came from behind in the fourth quarter to win on the road at BYU. And three days before that, challenged in the second half by Little Rock, they turned that game around to win by 10 points, even on a night they shot 41.7 percent.

It was against Little Rock, Nov. 16, Coale witnessed a resolve she hadn’t seen in some time from one of her teams.

“It is different,” she said. “And what you’re seeing is not a mirage.”

Yet, if that was a step, what happened against the Jackrabbits Wednesday may have been a leap, even if a couple of numbers didn’t quite back it up.

OU shot 39.1 percent (27 of 69) from the floor and were outrebounded 43 to 40 by a bigger South Dakota State team. Nonetheless, the Sooners did many things right.

They finished with 12 steals and turned the Jackrabbits over 22 times, 8.5 more than their average. The Sooners blocked six shots, almost three more than their 3.4 average a year ago. They dished 19 assists despite the poor shooting. A year ago, OU dished more than that just six times and only once after Big 12 play began.

Also, OU did it against a program that finished two points short of upsetting Stanford at the NCAA tournament last season to reach the Sweet 16, that went 27-7 overall and 13-3 in the Summit League before winning the league’s postseason tourney and that began this season 4-0, including a victory just three days earlier at Iowa.

“I feel like everyone on our team has a sense of confidence that is just blooming out of each and every individual,” starting post Vionise Pierre-Louis, who netted her second double-double of the season with 13 points and 14 rebounds, said. “We are all genuinely excited to play this game and to be on the court with each other. You can feel that. Everyone knows what to do and where they are supposed to be.”

The Sooners achieved a few other welcome numbers against South Dakota State.

They got 17 points from Peyton Little, who made 4 of 9 3-point attempts.

The last time Little made four 3-pointers was against Purdue at the NCAA tournament last season. The last time before that was at Baylor in the Sooners’ second conference game of the season.

Maddie Manning, whose confidence wilted a year ago, finished with 15 points on 6 of 12 shooting, dishing four assists and nabbing seven steals without a turnover.

“Before the game, we had a quote that we focused on,” Manning said. “‘Honor the space between no longer and not yet,’ and I feel like that is exactly where we are right now in the season … We just have that confidence right now.”

Next on the docket, Colorado State visits at 2 p.m. Sunday. The Rams went 31-2 last season, dominating the Mountain West Conference. After that, on Dec. 1, OU visits No. 20 Kentucky.

If the Sooners want to be in the statement-making business, they’re getting their chance very early in the season.

“Every game has given us a very specific area in which to grow,” Coale said.

Thus far, the Sooners have taken each of those opportunities and grown.

Keep it up and they could be in the midst of a special season.

“This year,” said Manning, “it is different.”