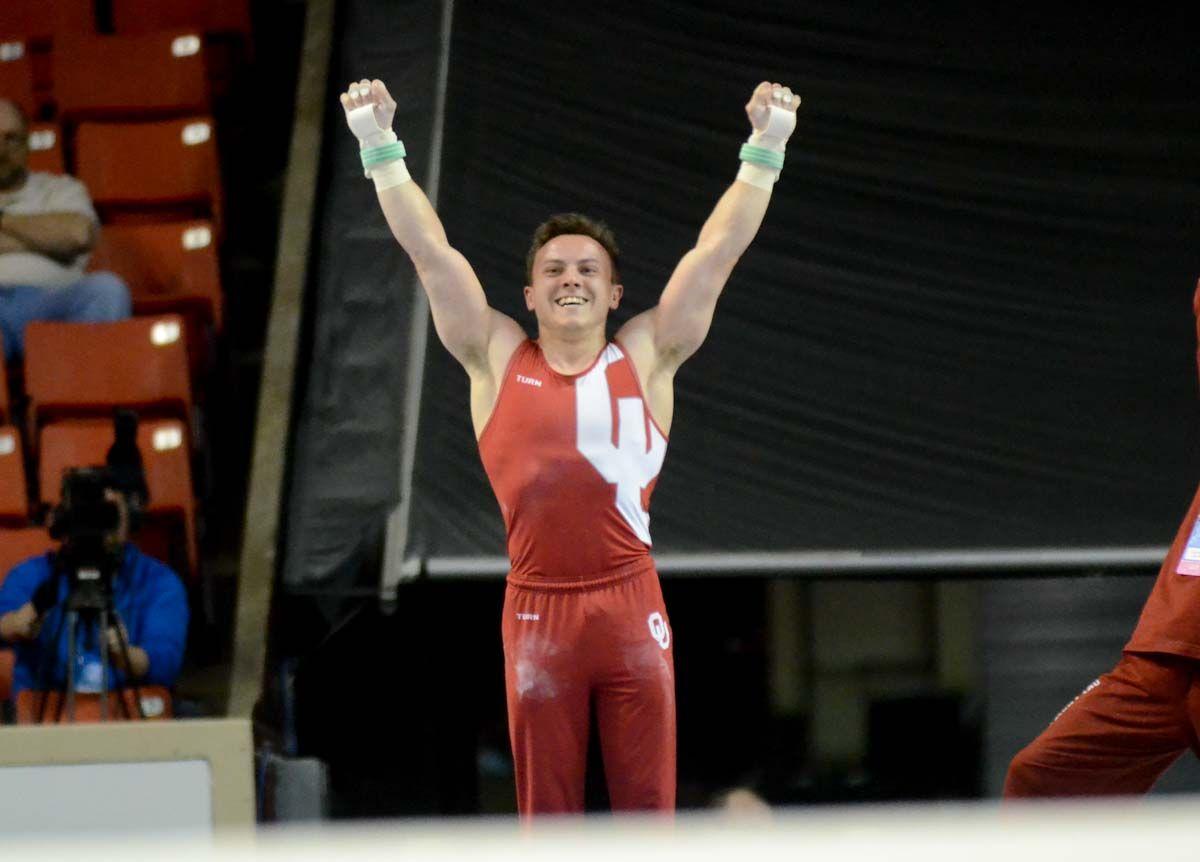 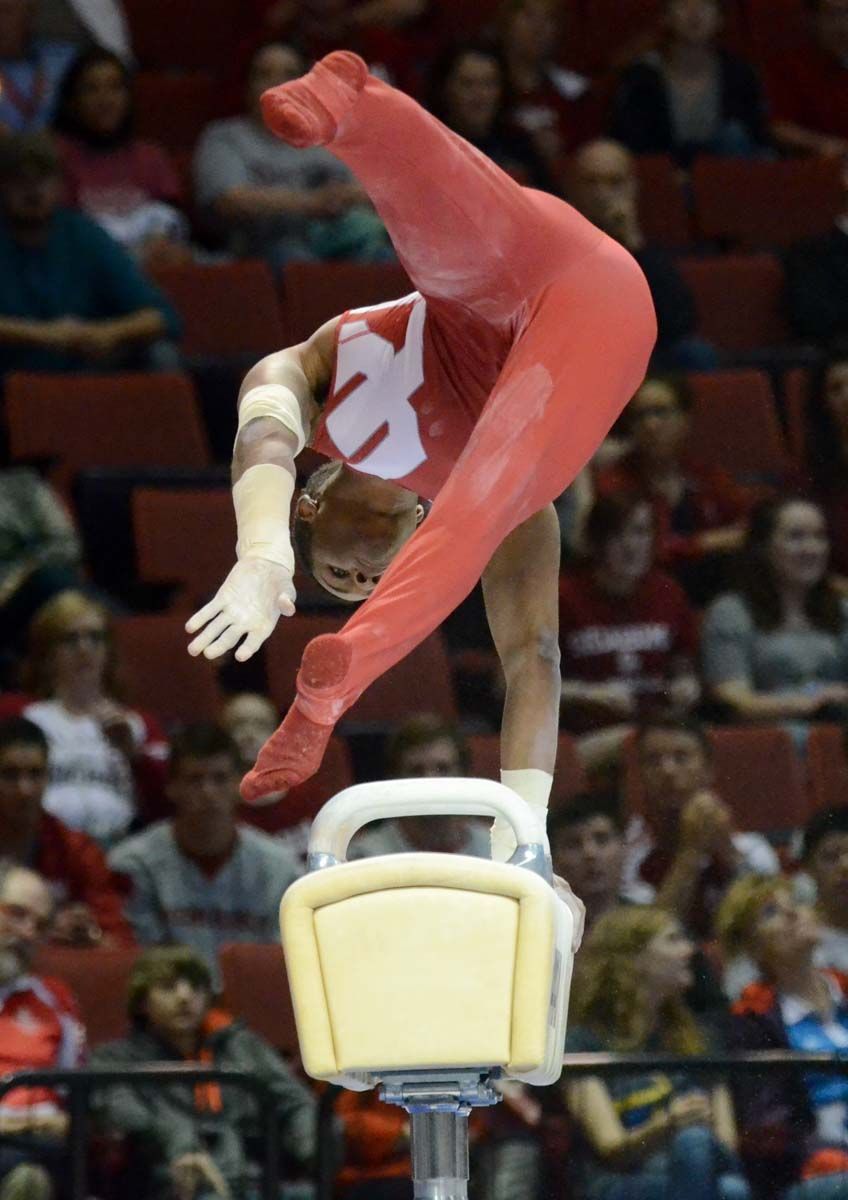 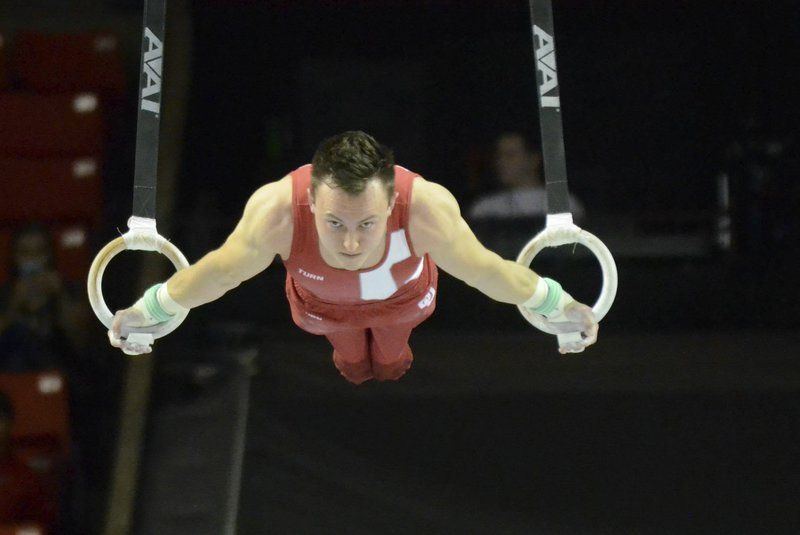 When Michael Squires first arrived at Oklahoma in 2011, not much was expected him. Coming out of Edmond North High School, he was not a known entity or on the national team watch list.

In fact, Squires first year at OU, he was a walk-on to a team that featured the likes of Jake Dalton and Steven Legendre, who are now part of the Mens National Team.

But Squires had two qualities that made him believe he could compete with the best athletes in the sport. He knew how to work hard and he was not afraid of anyone.

In the four years Squires has been a member of the Sooners gymnastic team, it will be hard pressed to find anyone who has dominated one event like he has done with the still rings. He ended his career Saturday night by winning his third straight individual national championship on his home floor at the University of Oklahoma's Lloyd Noble Center.

“It's incredible,” Dalton said. “It's a work ethic that some people have. He is one of those guys who is in that top one percent for work ethic. He will be in the gym spending three to four hours of workout on one event. It's just crazy. When he walked onto this team, I wasn't really sure he would make the team because he is doing one event. He made the team, then one year later he is winning national championships. So that just goes to show how hard he works.”

Joining Squires on the medal stand was senior Michael Reid who took home his first national championship on the pommel horse.

The Sooners finished with 14 All-Americans this year. It's 15 consecutive years with at least eight All-Americans.

Squires posted a 16.400 in his final time competing in the crimson and cream uniform. When he was done, he raised his hands in celebration then kissed the bar holding up the rings.

“It feels good,” Squires said. “I'm pretty happy, but I think I'm even more happy that we were able to win a team championship last night.”

Squires score dwarfs his two previous title performances of 15.777 as a sophomore and 15.800 as a junior. Squires closest competitor, C.J. Maestas of Illinois, managed only a 15.975.

“I think my career, in part, is due to how this team has grown a lot,” Squires said. “It wasn't just me. Look at the senior class. Coming in, we were really young and inexperienced. I was kind of the same way on rings. And as we've grown as a team, the same thing happens on rings. It all correlates. I have to thank my teammates more than anybody, because they are the ones I push for.”

But the biggest moment for him was being part of the turning point for the Sooners Friday when they reclaimed the national team title, it's first since 2008.

“When I was thinking about this season and what it reminded me of, it made me think back to the 2006 season when the OU team went undefeated and won a National Championship,” Squires said. “I was there watching OU compete in Norman and I have been doing that since I was 10 years old. I have wanted to be on this team the whole time. Back then those guys were invincible and they were the greatest gymnast in the entire world. I still don’t think I am as good as any of those guys; they're legends to me.”

Even now, as he prepares to leave Oklahoma as one of its most decorated gymnasts, he didn't see it coming the first day he set foot on campus.

“Not at all,” Squires said. “I don't think anybody did, which is the special part. I just want everybody to know that they can do this. It's all just a matter of hard work. It doesn't take the most talented guy to win it. Just takes the guy with the most fight. That's been the key for me and this entire team. We don't have any super stars, don't have any Olympians. We're just a bunch of gymnasts coming together, putting up the highest score, because we want it more than anybody.”

When asked what has been the highlight of his impressive career, it didn't take long for Squires to point out winning a team title. For all the individual success he has had, he is still a team player at heart

“Winning a team championship means more than anything,” Squires said. “that's what really cements any legacy. You can look back and say this guy was good at this event and he won a national championship. But to come together as a team, in my opinion, that's much harder. The fact that I have done something now that my heroes have done; it is cool. That was the best night of my life.”